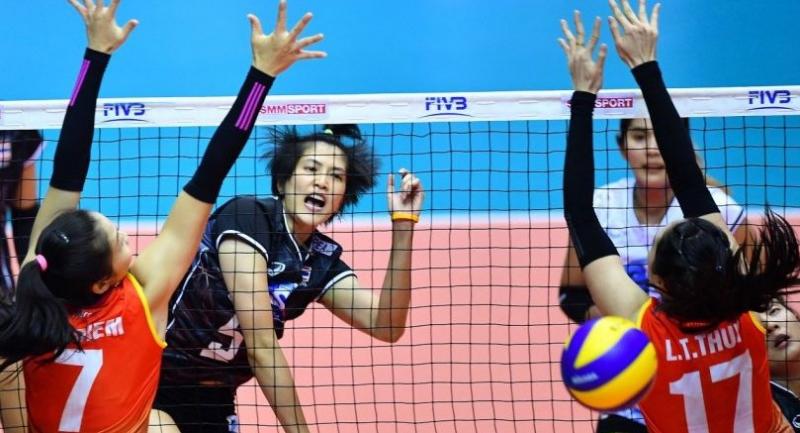 Thailand, which powered past young Iran in straight sets in their opener on Wednesday, remained strong in their starting line-up which included superstar spiker Pleumjit Thinkaow and three young talents Chatchu-on Moksri, Pimpichaya Kokram and Ajcharaporn Kongyot. The two towers, 190cm Tran Thi Thanh Thuy and 186cm Bui Thi Nga, were the spearheads of Vietnam, which fielded all players who competed in the fifth-placed squad at the Asian Senior Women’s Championship in the Philippines last month.

Thailand set an early pace in the opening set, with Chatchu-on and Ajcharaporn pounding the Vietnamese defence with their fierce attacks for the host side’s wide margin 12-6 lead. As the lead was stretched to 18-12, Thailand replaced setter Pornpun Guedpard and Pimpichaya with two veterans and crowd favourites Nootsara Tomkom and Malika Kanthong. Vietnamese Tran Thi Thanh Thuy used her height advantage to overcome the smaller blockers with her attacks, but not enough to outplay the formidable rivals. Thailand clinched the first set 25-17. Thailand remained in awesome form in the second set, which they led 11-5, thanks to Pleumjit’s well-placed serves and fast attacks which completely foiled the Vietnamese blocking attempts. Holding a 20-12 advantage, Thailand committed several unforced mistakes, allowing the visitors attacking opportunities to trail 17-20. The host side called a time-out and sent in powerful Wilavan Apinyapong. From then, Thailand turned the tables on the visitors, winning straight five points for the convincing 25-17 win in the set.

Vietnam led narrowly 9-7 in the third set before Thailand put their act together and stormed back mightily for the come-from-behind 25-17 win.