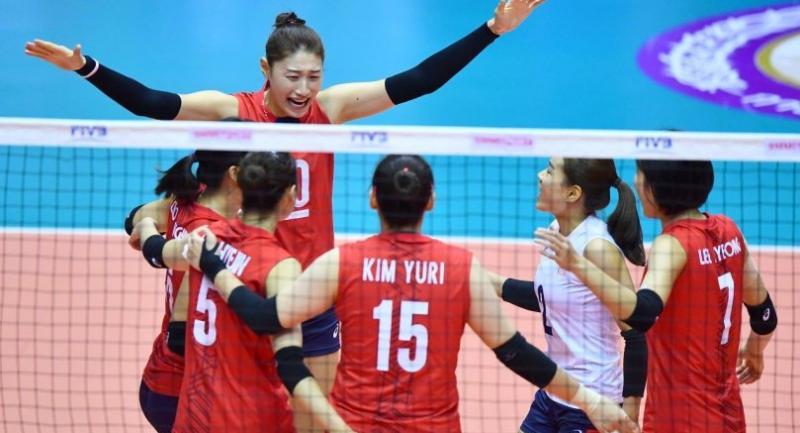 Crowd favourites and world No.10 Korea took advantage of their greater experience and form to race to a wide margin 6-0 and stretched it to 19-12, utilising Kim Yeonkoung’s height and power at the net to dominate the whole game. Iran gradually clawed their ways back, with Mahsa Saberi puncturing the Korean defence with her sharp spikes and Mahta Yahyapour and Neda Chamlanian producing solid blocks to help the team reduce the gap 16-21. However,  the Koreans’ scoring spurts at the near end of the set helped them pull away and seal the set win 25-16.

Holding a 1-0 advantage, Korea stormed on with their consistency on both defence and offence, while the young Iranians had difficulty to convert on their attacking attempts. Taking a commanding 20-14 lead, Korea struggled as the rivals came up with good digs to counter-attack well for straight three winning points. Hong Sungjin called a time-out to give his players a tip to play Iran and from then on, the Koreans never looked back as they allowed the Iranians only one more point to take the set 25-18. Going down in two sets, Iran came all-out in the third set. Their determination bore fruits as they trailed from 11-14 down to catch up with the Koreans at 17-all. However, Lee Jaeyeong and Park Jeongah put Korea back on track as they attacked spectacularly at the wings to help the Koreans capture the hard-fought set 25-20 and match.

Korea head coach Hong Sungjin said after the match: “Iran have tall players. They served well and came up with powerful attacks today. Fortunately, we practised a lot for this match. We were confident of beating Iran. I think the tomorrow’s match against Vietnam will be much tougher than this. We focus on that match as well as the last match against hosts Thailand. If we can beat Vietnam on Saturday, we will secure a ticket to Japan for the World Championship Finals next year. However, we will try our best in both remaining matches.”

Superstar spiker Kim Yeonkoung, who will play professionally with Shanghai Club in China next season, said, “I think Iran fielded tall players. They served and blocked well. We just did our best today.”

With the loss to Korea, Iran are assured of missing the cut for the next year’s World Championship Finals in Japan. The Iranians had already played three matches and lost them all. They will have a rest day on Saturday and will play their last match against Vietnam on Sunday.

Korea, like Thailand, still enjoyed a good run in the single round-robin tournament. They claimed consecutive two wins without losing a set and remain in contention for the top two in Pool B. Korea are due to take on Vietnam on Saturday.