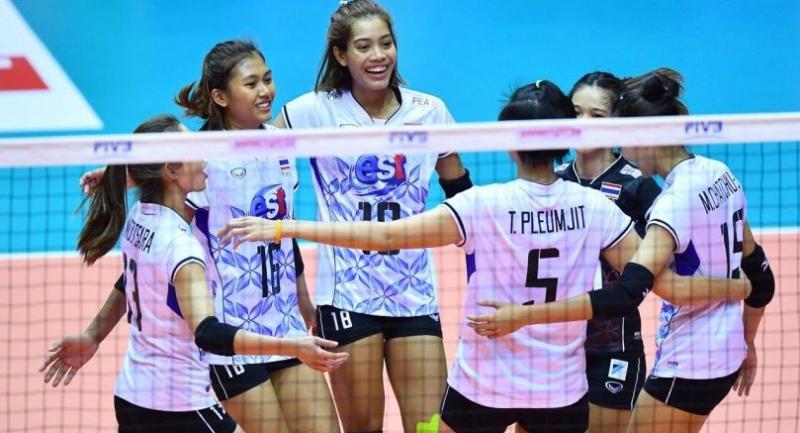 Thailand had four players who scored in double figures. Chatchu-on Moksri made 15 attacks and 1 block for the host side, while captain Pleumjit Thinkaow scored 15 points including 10 attacks and four blocks. Pimpichaya Kokram (11) and Ajcharaporn Kongyot (10) were also instrumental in lifting Thailand the straight-set victory. Jong Jin Sim scored a match-high 16 points for DPR Korea including 15 kills from 51 attempts.

Thailand and DPR Korea started in a hard-fought duel as both teams exchanged attack points. At 5-5, the host side scored six straight points to advance to 11-5. From then, the Koreans remained strong in their attacks, while the host side played with great momentum, refusing to allow any run by the formidable visitors. At 20-all, Chatchu-on Moksri’s fiery performance sparked Thailand to a commanding 24-20 lead. Jong Jin Sim attacked devastatingly at the wing to help the Koreans save one set point before a spike from Pimpichaya Kokram went without returning from the Koreans. Thailand took the see-saw set 25-21.

Both teams still went through another tight clash in the second set, with Thailand giving away crucial points to their team on the rivals’ turnovers. After an exchange of points, the scores were levelled at 21-21 before an erratic serve from Jong Jin Sim moved Thailand ahead 22-21. After that, the host side never looked back. They scored three successive points for the convincing 25-21 win. Thailand remained in their mission in the third set as they performed solidly to lead 16-9 before the Koreans bounced back to win four points in a row. Boosted by a large number of cheering home fans packing the venue, Thailand continued their winning way to prevail the set 25-19 and match.

Thailand head coach Danai Sriwacharamaytakul said after the match: “My players’ performance lived up to staff coaches’ expectation. It was just the very first mission of our team to qualify for the Japan Finals. However, I praised DPR Korea for their solid performance in this match against us. Captain Jong Jin Sim played well beyond my expectation, but fortunately we served well, forcing them to drop their rhythm at the near end of each set. Howevver, we have to improve more on defensive structure in our next match against Korea. Since the tournament is being held at home, we have to play our best against Korea although two of us have already qualified. We have to play them in several tournaments in the near future. It will also serve as a technical test for my players.”

With the straight-set win, hosts Thailand registered 9 points from winning three straight matches, the similar performance as Korea. With only one match remaining, Thailand and Korea are assured of clinching the two slots on offer in Pool B for the next year’s World Championship Finals. The Sunday’s match between Thailand and Korea will be held to seek the strongest team in this round-robin tournament.

DPR Korea have been absent from the World Championship Finals for 31 years since they last participated in the 1986 edition, when they finished 14th position. They had already completed all four matches, which they suffered two losses to Korea and Thailand and therefore, had their dreams of qualifying to the Japan Finals shattered.