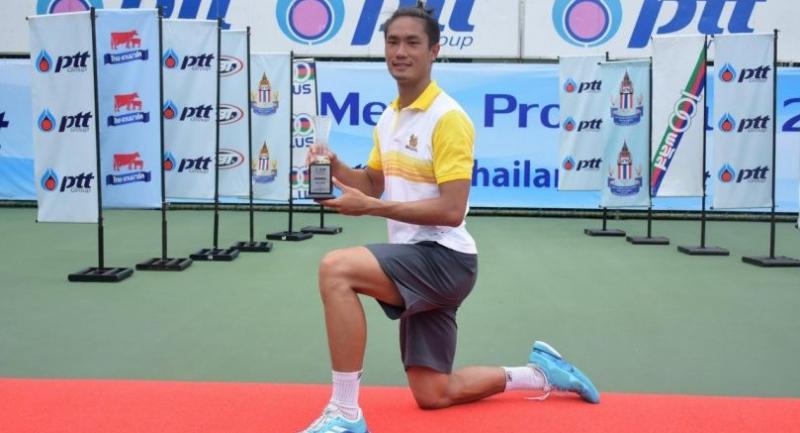 Wishaya Trongcharoenchaikul became the fourth Thai man in the history to win an ITF singles trophy following his lop-sided victory over American Nicholas Hu 6-2 6-4 in the final round of the US$15,000 PTT ITF Men’s pro Circuit in Nonthaburi yesterday.

The 22-year-old big-hitting Bangkokian needed just 77 minutes to win his maiden ITF singles trophy and is the only Thai in three years to do so.

Only Paradorn Srichaphan in 1998, Danai Udomchoke in 1999 and Kittipong Wachiramanowong in 2011 were the three previous singles winners on the ITF circuit.

“All the hard work finally paid-off. I was happy to win the final after losing twice before. It’s a load-off,” said Wishaya who lost his first final in Hong Kong three years ago and his second in Wuhan in May this year.

Previously, Wishaya’s big win was a doubles Challenger title along with Kittipong in Bangkok 13 months ago.

Currently at No 579 in the world, Wishaya’s never-give-up attitude played a significant role in his outstanding results compared to other Thai men in recent years.

After reaching his first final in 2014 at 19, Wishaya barely managed to move beyond the first rounds in all tournaments he entered in 2015.

He crashed out in ninth straight first round matches between August 2015-January 2016, mainly due to should injury. Still he kept travelling to play with no plan to take a break.

“I knew I had to keep playing as I believe I can make it. The injury just slowed me down. I had to keep trying and at the same time work on my physical strength to cope up with the injury,” said the Wishaya, who started showing good results in August last year by reaching the quarter-finals and semi-finals in several events.

Professionalism is another reason why Wishaya stands out than his peers. He is the only player who has a coach, physical trainer and seeks psychological advice. Many Thai players rely almost everything on their coaches.

“If you work with a team, there’s no doubt that you tend to achieve better than working alone. You just need quite some time before results will come. You cannot rush,” said Wishaya.

He then went back out and teamed up with Issei Okamura of Japan in the doubles final but could not repeat his earlier success, losing 4-6 7-5 4-10 to Hiroyasu Ehara and Shunrou Takeshima of Japan.

Wishaya’s breakthrough victory will spark hope in Thai tennis circles, which have been deflated by a serious lack of superstars since heroes like Paradorn and Tamarine Tanasugarn hanged up their racquets.

He next targets to win a Challenger event and be accepted in the qualifying list of a Major. In the women’s events, meanwhile, second seeds Nudinda Luangnam and Varunya Wongteanchai beat Mirjam Bjorklund of Sweden and Sun Lulu of Switzerland 6-4 6-4 to win the doubles.