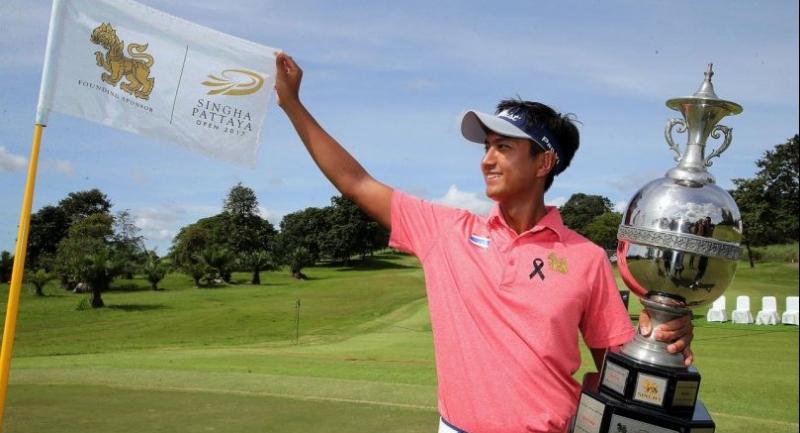 Sadom Kaewkanjana has the trophy but no prize-money after winning the Pattaya Open yesterday.

The 19-year-old from Narathiwat sank six birdies against a lone bogey on the ninth hole at the Burapa Golf and Resort to finish on eight under-par-272 and claim the biggest win of his career.

“I’m so proud of myself to win this title, which is my first in a pro event. I didn’t really expect to win. I just went out there and played my game,” said the SEA Games men’s team silver medallist.

“I tried to hit the fairways and went for the flag positions if I had opportunities to make birdies. For the tough holes, I just played it safe,” added the Ramkhamhaeng University first-year student.

Sadom succeeded Sarit Suwannarat, who also won last year as an amateur, but only four amateurs have ever won on the All Thailand Tour – the others were Phachara Kongwatmai (Hua Hin, 2013) and Kosuke Yamamoto (Hua Hin, 2015). “I’m not surprised that amateurs won two years in a row as we are getting better and better and keep working hard,” added Sadom, the 2016 Finnish Amateur Open winner who will fly to New Zealand next week for the Asia/Pacific Junior Golf Championship.

The teenager however has no plan to turn pro until after he represents Thailand in the 2018 Asian Games in Indonesia.

Kamalas, 24, briefly led in Pattaya at eight under par after his outward nine but inconsistency led to him having to settle for a 69.

“I gave my all out there but I made some mistakes. Sadom was playing so well and deserved the win. It’s nice to see my SEA Games fellow player won anyway,” Kamalas said.

Due to their amateur status, however, neither was eligible for the winner’s prize of BT363,750 – that went to each of the third-place finishers, Sutijet Kooratanapisan and Namchok Tantipokhakul, who signed off with a 67 and 71 respectively for 276s.

Overnight leader Pawin Ingkharadit failed to maintain his lead on the final day, stumbling to a 77 and an even-par 280.