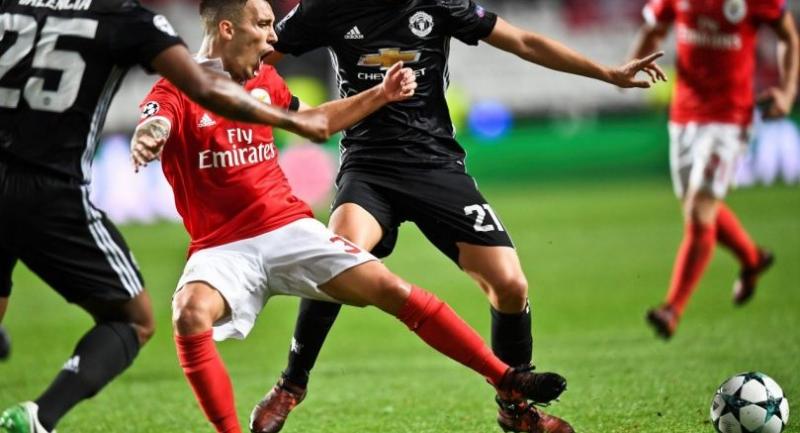 Paris  - Chelsea were grateful to Eden Hazard for grabbing a 3-3 draw in a Champions League thriller against Roma on Wednesday, while Manchester United, Barcelona, Paris Saint-Germain, Bayern Munich and Juventus all won.

Hazard headed in his second goal of the night from a Pedro Rodriguez cross with quarter of an hour left at Stamford Bridge to rescue Chelsea after they had earlier blown a two-goal lead against the Italians.

With Carlo Ancelotti, former Chelsea coach and Roma player, watching from the stands, David Luiz curled the English champions into an early lead and Hazard increased their advantage.

But Aleksandar Kolarov pulled one back for Roma before the interval and Edin Dzeko equalised with a stunning volley on 64 minutes before his header put the visitors ahead to the disbelief of the home fans in west London.

"It was a difficult game against a good team. We suffered in possession and it wasn't easy in the first half, despite scoring two goals," said Chelsea boss Antonio Conte.

Beaten finalists in 2014 and 2016, Atletico could only draw 0-0 in Azerbaijan against Qarabag, who claimed their first ever Champions League point despite having South African striker Dino Ndlovu sent off late on.

Chelsea's draw also ensured that the five English clubs in the competition all picked up points this midweek, with United grinding out a 1-0 victory at Benfica to maintain their perfect record in Group A.

Jose Mourinho was returning to Lisbon to face the club he coached briefly in 2000 but it was Benfica's teenage goalkeeper Mile Svilar who stole the headlines.

The 18-year-old Belgian was handed a start to become the youngest ever goalkeeper in the Champions League and was at fault for the only goal of a flat game.

Svilar was caught out when Marcus Rashford delivered a free-kick from wide on the left on 64 minutes and he could only carry the ball over the line.

Benfica's misery was completed when captain Luisao was sent off in stoppage time.

"I never felt that we could concede a goal. Sometimes I feel to be good defensively is a crime but it is not a crime," said Mourinho.

Barcelona still have a perfect record in Group D as they beat Olympiakos 3-1 despite having Gerard Pique sent off in the first half.

Driving rain meant the mostly uncovered 99,000-capacity Camp Nou was largely empty as it opened to fans for the first time since a violent crackdown of an independence referendum in Catalonia on October 1.

Those who did turn out saw Pique stupidly collect a second yellow card for handling the ball into the net late in the first half.

Barca were already ahead at that point from a Dimitrios Nikolaou own goal and they added further goals in the second half with Lionel Messi netting a free-kick -- his 100th European goal -- and setting up Lucas Digne to score.

Nikolaou pulled one back for the Greeks, who are still pointless.

Juventus are second in the group after coming from behind to beat Sporting Lisbon 2-1 in Turin, with Miralem Pjanic curling in a free-kick to cancel out Alex Sandro's own goal and Mario Mandzukic heading in a late winner.

PSG continued their superb start in Europe this season as their 'MCN' attack all scored in a 4-0 victory at Anderlecht.

Kylian Mbappe opened the scoring inside two minutes and Edinson Cavani headed in the second before the interval.

Neymar's free-kick made it three in the second half, with substitute Angel di Maria completing the rout.

PSG are top of Group B with nine points, three more than Bayern Munich, who eased to a 3-0 victory over Celtic.

The 72-year-old Jupp Heynckes was back in the Bayern dugout and he saw Thomas Mueller, Joshua Kimmich and Mats Hummels all score.