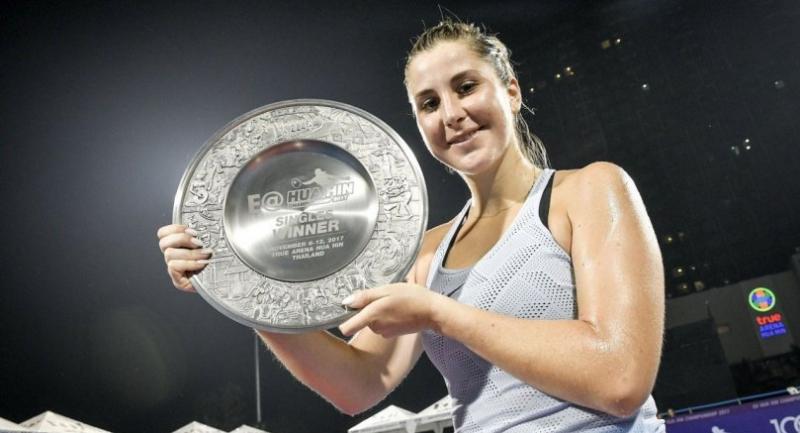 Belinda Bencic poses with her shield after winning her third WTA title in Hua Hin.

Belinda Bencic of Switzerland won her first WTA title since her comeback from injuries as she beat Taiwanese veteran Hsieh Su Wei of Taiwan 6-3 6-4 in the US$125,000 EA Hua Hin Championship at the True Arena on Sunday.

The 20-year-old from Wollerau kept the Taiwanese at her bay with dominating groundstrokes throughout the 1.37 hour of battle to claim her third WTA win since Eastbound and Toronto in 2015.

Reaching a career high at No 7 in February last year, Bencic sustained a wrist injury between April and September and is just in her fifth comeback event.

“I’m supper happy with my win. I have to thank my coach and hitting partner for their help. Also I have to thank all the Swiss fans for your support for the whole week. I feel like home,” said Bencic who also defeated the Taiwanese in Tianjin in three sets 6-4 4-6 6-2 three years ago. The first set went on with several breaks of serves with the Swiss being the generating power from both wings and the Taiwanese hanging in there waiting for errors.

Bencic jumped to a 3-1 lead first before Hsieh fought back for three all. Bencic ‘s unrelenting groundstrokes gave her another break to regain the lead at 4-3 before she comfortably held for 5-3.

The Taiwanese blast a big serve to save a match point and escaped it again after forcing Bencic to miss a forehand.

The Swiss attacked a weak serve from Hsieh to arrive at her third set point and completed the 44-minute opener as her opponent hit a forehand long.

Bencic’s powerful groundstrokes still gave her the edge over Hsieh in the second set as she broke to lead 3-1.  But the Taiwanese tightened her defence and exchanged rallies with the hard-hitting Bencic to fight back for 3-3.

AT four all , Hsieh had several chances to break but Bencic never gave up as she ran down all shots to save and led 5-4.

The Taiwanese overhit a shot long to be on the threshold of defeat at 30-40 and 4-5 but she pounded a backhand down the line winner to get away.

Bencic whipped a forehand winner to have her second championship point but the stubborn Hsieh got off the hook with another brilliant backhand winner. After saving three championship points with winners, Hsieh made two easy shots to finally surrender the match.

“I haven’t been in final in the WTA for a long time. I think I have done pretty well this week.,” said Hsieh, the former world No 1 doubles player.

Bencic will next enter a 125K WTA event in Taiwan which starts on Monday. Tags:
Belinda Bencic of Switzerland won her first WTA title since her comeback from injuries as she beat Taiwanese veteran Hsieh Su Wei of Taiwan 6-3 6-4 in