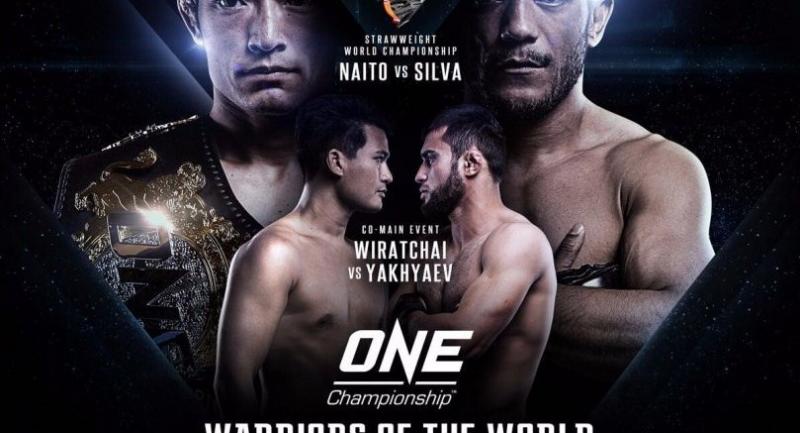 ONE Championship has just announced another blockbuster showdown at ONE: WARRIORS OF THE WORLD, scheduled for the Impact Arena in Bangkok on Saturday, 9 December.

Undefeated ONE Strawweight World Champion Yoshitaka “Nobita” Naito of Chiba, Japan will defend his title against Alex “Little Rock” Silva of Sao Paulo, Brazil in the main event of the evening.

Yoshitaka Naito, ONE Strawweight World Champion, stated: “Winning the ONE Strawweight World Championship and becoming world champion has always been a dream of mine. To be recognized amongst my peers as the best at what I do, it’s important to me. Having this belt means I am a master of my craft. It hasn’t been easy. It takes a lot of hard work and dedication, but I am prepared to do whatever it takes. Alex Silva is a worthy challenger and an amazing competitor. I look forward to testing my skills against him.”

Alex Silva, ONE World Title Challenger, stated: “Defeating Hayato Suzuki has been one of my greatest accomplishments inside the ONE Championship cage. I was very well prepared to for him, I expected a tougher match and I did not expect him to try to take me down and compete with me on the ground because I knew if it went to the ground that I would submit him. So I saw the armbar, I went for it and now we’re here. I'm competing for the ONE Strawweight World Championship and have a chance to be known as the best strawweight in the world. I'm excited for the opportunity and in the name of Jesus Christ, I will bring this belt back to my team, Evolve! Honor and glory to God!”

Reigning and defending ONE Strawweight World Champion Yoshitaka “Nobita” Naito of Chiba, Japan, is an unbeaten in his professional career with a perfect 12-0 record. He owns six victories by submission and one by knockout. The 33-year-old, who made a name for himself at Japan’s world famous Korakuen Hall competing for Shooto as its Flyweight Champion, captured the ONE Strawweight World Championship in by submitting the Dejdamrong Sor Amnuaysirichoke in his promotional debut in 2016. Naito makes the second defense of his strawweight belt against Alex Silva in Bangkok this December.

Alex “Little Rock” Silva of Sao Paulo, Brazil, is a second-degree Brazilian jiu-jitsu black belt and world champion with a professional record of 6-1. Silva is riding high on a five-bout winning streak, rapidly climbing ONE Championship’s stacked flyweight ranks. He is a technical grappling specialist with a penchant for securing highlight-reel submission finishes. With steadily increasing confidence, Silva’s last five victories have all ended in spectacular fashion. In his most recent contest, Silva made quick work of the highly-regarded and previously unbeaten Hayato Suzuki, earning him an opportunity at the ONE Strawweight World Championship.

Tags:
ONE Championship™ (ONE) has just announced another blockbuster showdown at ONE: WARRIORS OF THE WORLD scheduled for the Impact Arena in Bangkok on Sat