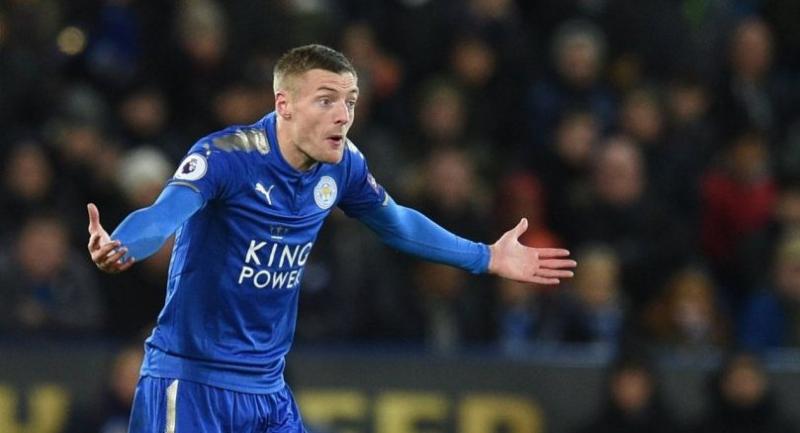 Vardy struck early on before Riyad Mahrez doubled Leicester's lead, only for Harry Kane to ensure a nervous finish for the Foxes at the King Power Stadium.

Victory for Leicester made it three Premier League games without a win for Spurs, who improved markedly after the break and rained pressure on the Foxes goal.

Tottenham were denied what appeared to be a certain penalty at the death when Danny Rose was caught by Wilfred Ndidi.

But the cold fact of this defeat was it left north London side Tottenham, last crowned champions of England 56 years ago, 13 points behind Premier League leaders Manchester City.

Leicester looked to take the initiative from the first whistle, and a towering header by Wes Morgan was hooked off the line by Rose from Marc Albrighton's corner.

The Foxes continued to look to catch Spurs on the counter-attack and took the lead with a move of simple brilliance in the 13th minute.

Albrighton sent Vardy through into the space between defenders Davinson Sanchez and Eric Dier.

The England striker then showed superb awareness to produce a stretching volley which gave Spurs goalkeeper Hugo Lloris no chance.

Tottenham looked to respond and Kane put Moussa Sissoko in on goal but the France international saw his shot superbly blocked by the legs of Kasper Schmeichel.

Leicester midfielder Vicente Iborra was having an outstanding night and he showed Kane the way in the 26th minute when his volley bounced a couple of feet wide after some dazzling footwork on the right from Mahrez.

Counter-attacking was looking the best route to goal and Spurs tried to create one such move of their own from a Leicester corner in the 32nd minute.

Christian Eriksen surged forwards and with Kane in hot pursuit to his right and Dele Alli beyond him, he chose the latter but the England international failed to connect properly and his effort rolled wide.

Leicester went close to a second goal from an unexpected source in the 33rd minute when Rose's clearance from Vardy's cross drifted inches past Lloris's post.

But Leicester deservedly made it 2-0 with another brilliant goal in added-on time at the end of the first half.

Mahrez took a short pass from Ndidi and, with Rose caught out of position, cut inside, exposing Jan Vertonghen.

The Belgian defender continued to back off and Mahrez's punishment was ruthless as he unleashed a fabulous curling shot which ripped past Lloris into the top corner of the net.

Leicester should have made it 3-0 in the 55th minute.

A slaloming run from Chilwell took him past two challenges and from Vardy's cross whipped in fiercely from the right, Shinji Okazaki could only glance over from a free header.

Spurs forward Erik Lamela, who had been out of action for 399 days after surgery on both hips, came off the bench to clinical effect in the 77th minute.

Within a minute of his arrival, the Argentinian had escaped his marker to accept Son Heung-Min's pass and find Kane, who fired into the roof of the net to halve the deficit.

Spurs' frustrations were complete when they were denied a penalty in time added on.