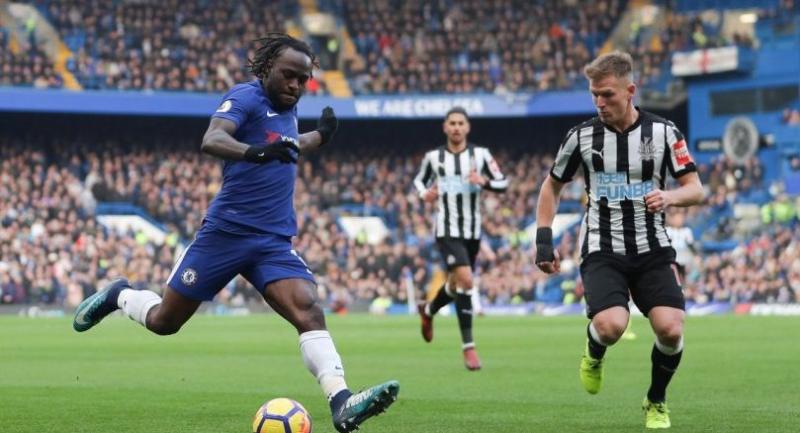 London - Eden Hazard sparkled as Chelsea swept Newcastle aside on Saturday to cling on to the coattails of runaway leaders Manchester City but 10-man Tottenham slipped further off the pace with a costly draw at Watford.

But Mauricio Pochettino must find a way of lifting his struggling team after they dropped two more vital points against Watford in a 1-1 draw at Vicarage Road, leaving them 15 points off the pace.

Hazard's eye-catching performance in a 3-1 win at Stamford Bridge will mean sleepless nights for England boss Gareth Southgate, who has the unenviable task of nullifying the Belgian's threat at next year's World Cup in Russia.

Chelsea's victory, which kept them third in the Premier League, eight points behind City, ought to have been more emphatic but they were forced to work for their win after falling behind early as Dwight Gayle took advantage of some untidy defensive work.

Hazard pulled Chelsea level within 10 minutes and scored the final goal with an impudent penalty either side of an Alvaro Morata header as the defending champions turned on the style.

"The gap is eight points now, and there's still a long way to go so that's why we have to keep getting closer and closer and hope they slip up," said midfielder Cesc Fabregas. "They are there because they deserve it. Our job is to keep winning."

Free-scoring Liverpool blitzed Brighton 5-1 on the south coast. Emre Can broke the deadlock after half an hour and a double from Roberto Firmino made it 3-0.

A late strike from Philippe Coutinho restored the visitors' three-goal margin after a Glenn Murray penalty and an own goal from Lewis Dunk added to Brighton's pain.

Jurgen Klopp's side, with 12 goals in their past three Premier League away games, moved into the top four ahead of the Arsenal-United match with five wins in their past six fixtures in the competition since their 4-1 drubbing by Spurs in October.

"We scored two fantastic goals," said Klopp. "It was good to watch. We scored a third which is a good idea in a game like this."

"Our line-up surprised everybody," he added. "It's a good moment that we can do things like this. They adapted and did the job."

Spurs have challenged for the Premier League crown in the past two seasons but their title push has come to a shuddering halt after a string of damaging results.

Mauricio Pochettino's side fell behind to an early Christian Kabasele header. Son Heung-Min equalised midway through the first half but Spurs were reduced to 10 men when Davinson Sanchez was dismissed shortly after the restart.

Sam Allardyce, overseeing his first match since he was confirmed as the new Everton manager, saw his side beat Huddersfield 2-0 for their second consecutive win as they climbed to the dizzy heights of 10th spot.

Stoke came from behind to beat Swansea 2-1 and ease the pressure on manager Mark Hughes and West Brom, under new manager Alan Pardew, played out a goalless draw against Crystal Palace, whose point lifted them off the bottom of the table.

In-form Arsenal host Manchester United in the late kick-off, with both sides aware that any more dropped points will make the task of catching City even more remote.

Jose Mourinho's men -- trailing City by eight points ahead of the Arsenal match -- have been the closest challengers to Guardiola's team and face them next weekend in a potentially season-defining derby.

But they come up against an Arsenal team who have won all seven of their home matches this term and United have a poor record in recent matches against fellow members of the "Big Six".

Tags:
Eden Hazard sparkled as Chelsea swept Newcastle aside on Saturday to cling on to the coattails of runaway leaders Manchester City but 10-man Tottenham