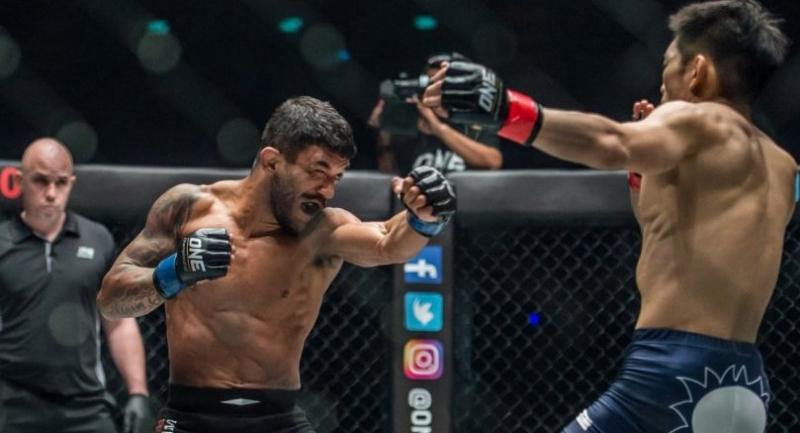 ONE Championship™ sent shockwaves throughout the iconic Impact Arena in Bangkok, Thailand with an exciting evening of world-class martial arts action.

ONE: WARRIORS OF THE WORLD showcased a series of compelling bouts, punctuated by a thrilling headliner that left fans on the edge of their seats. In the main event, Brazilian submission wizard Alex “Little Rock” Silva captured the coveted ONE Strawweight World Championship with a masterful display of striking, edging out previously unbeaten champion Yoshitaka “Nobita” Naito of Japan.

In the main event of ONE: WARRIORS OF THE WORLD, Alex “Little Rock” Silva wrapped the ONE Strawweight World Championship belt around his waist following a dominant striking performance, unveiling a new dimension to his evolving skillset by putting together dynamic combinations. Figuring in an offensive clinic against his Japanese counterpart, Silva overwhelmed Naito from the beginning of the bout, peppering his opponent with lashing leg kicks and rocking right hands. Although Silva had the upper hand in the first three rounds of the championship clash, he had to overcome a spirited performance from Naito, who did his best effort to wear down the Brazilian challenger in the last two periods of the contest. Relying on his exquisite jiu-jitsu background, Silva managed to defend Naito’s grappling advances to walk out of the Impact Arena with the unanimous decision victory and the prestigious ONE Strawweight World Championship in his possession.

Alex Silva, newly-minted ONE Strawweight World Champion, stated: “I don’t know man, it feels like a dream. If this is a dream, please wake me up. I can’t believe I’m here. Hard work, works. It pays off. I want to say thank you to all the fans who came out to watch and support me. I want to thank everyone at Evolve. This is not only my belt guys, this is ours. Those guys smash me in the gym, making me stronger everyday. I can’t believe I’m here.”

In the co-main event of the evening, Russian veteran Rasul Yakhyaev made a triumphant return to the ONE Championship cage, upsetting hometown hero Shannon “OneShin” Wiratchai in their three-round lightweight encounter. From the opening bell to the last round, Yakhyaev pacified Wiratchai’s exciting cage style by consistently landing his solid overhand right. Aside from taking control in the stand-up exchanges, Yakhyaev also proved his mettle on the ground with a technical grappling showcase, converting several takedown attempts and catching Wiratchai in two near-submission finishes. Yakhyaev punctuated the tactical encounter by grinding out Wiratchai in the third frame, earning the undivided nod from the three judges at cageside.

19-year-old martial arts prodigy Christian “The Warrior” Lee scored perhaps his most impressive victory yet, with complete and utter domination of Japanese martial arts veteran Kotetsu “No Face” Boku. Opening up the contest by taking the action right to Boku, Lee connected on a series of fast and powerful strikes, pushing Boku constantly back up against the cage. After taking Boku’s back however, Lee took the Japanese competitor for a ride with a belly-to-back suplex, sealing the stoppage with hammer fists to record his seventh first round finish.

Former world title challenger Riku “The Outsider” Shibuya of Japan placed himself back on the winning track by capturing an impressive submission conquest of former ONE Strawweight World Champion Dejdamrong Sor Amnuaysirichoke. After a brief moment on the feet, Shibuya wasted no time in taking the action to the mat, where he worked on the submission finish by latching on a guillotine choke to force the tap and the victory.

Rising Thai martial arts superstar Rika “Tinydoll” Ishige showcased an improved striking arsenal, comfortably exchanging combinations with opponent Rome Trinidad of the Philippines over the course of two rounds before scoring an exciting submission finish. Ishige and Trinidad kept the action focused primarily at the center of the ONE Championship cage for the majority of the bout. Towards the end of the second round however, Ishige took Trinidad’s back, brought her to the mat and sunk in a bout-ending rear naked choke to force the tap.

“The Panda” Xiong Jing Nan of China pulled off a successful promotional debut in ONE Championship, stopping Team Lakay’s April Osenio in the opening round of their catchweight clash. Living up to the billing as one of the top leading female martial arts talents in China, Xiong looked for the early finish by fastening a deep guillotine choke on Osenio. Although Osenio managed to break the submission hold and return to her feet, Xiong charged right back and drilled Osenio with a volley of crisp punches. Xiong then secured the stoppage after dazing Osenio with a staggering overhand right to notch another spectacular knockout.

Highly-decorated Muay Thai legend Sagetdao “Deadly Star” Petpayathai authored another sensational victory in front of a jubilant Thai crowd, defeating Filipino competitor Jimmy Yabo in the first round of their featherweight encounter. Relying on his well-regarded clinch game, Petpayathai scored his third consecutive knockout victory inside the ONE Championship cage by driving a hard knee to Yabo’s midsection, causing him to drop to the canvas in excruciating pain.

Former WBA Featherweight World Champion Yodsanan “Little Tyson” Sityodtong of Thailand made quick work of opponent Dodi Mardian of Indonesia, finishing with a beautiful left hand straight down the middle. In an impressive display of ferociousness, Sityodtong tagged Mardian repeatedly with the kind of punches he became known for as a professional boxer. In the end, Mardian just couldn’t deal with Sityodtong’s power as he fell in the first round by knockout.

Thai wrestling champion Kritsada “Dream Man” Kongsrichai drew loud cheers from the packed crowd with another dominant victory, this time over Filipino competitor Rabin “The Rock” Catalan. Blasting Catalan with a furious offensive featuring his best striking combinations, Kongsrichai took matters to the ground and quickly got mount, finishing Catalan off with elbows and punches.

Kicking off all the action at ONE: WARRIORS OF THE WORLD were bantamweights Tang De Pan of China and Asraful “Warrior” Islam of Bangladesh, who gave fans a spirited effort over three rounds. After a gruelling bout, it was Tang who emerged victorious via unanimous decision.

Official results for ONE: WARRIORS OF THE WORLD

Tags:
ONE Championship™ sent shockwaves throughout the iconic Impact Arena in Bangkok Thailand with an exciting evening of world-class martial arts action.