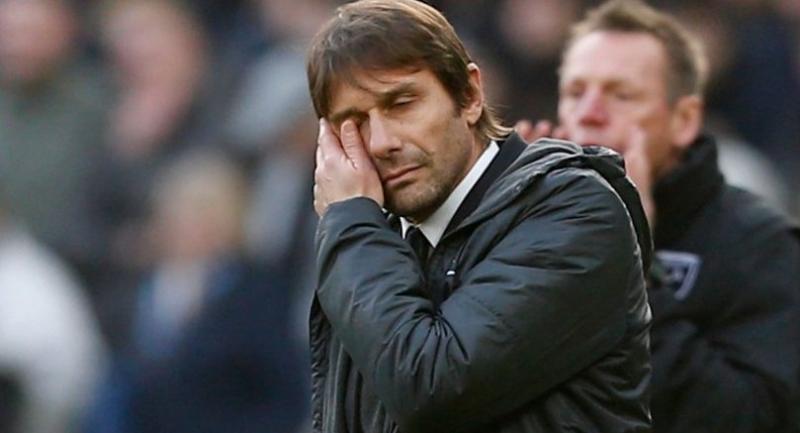 The loss at the London Stadium was the champions fourth in their opening 16 league games and left them 11 points behind Manchester City 24 hours before the leaders face second-placed Manchester United.

"To talk about the title race after a defeat is a bit strange," said Conte.

"Especially if this is the fourth defeat in 16 games. When you have this start it is impossible to think you are in the title race.

"If you want to stay in the title race you can lose once or twice in this period.

"After 16 games if you lose four games it means we never started this race.

"Manchester City are having a fantastic season and if you want to stay in the title race you must give consistency and this is not the case with us."

Conte made it clear he believes one of the reasons for his side's stuttering progress this season -- unlike last year they have also had to contend with the demands of European football -- is the lack of options in his squad.

The Italian was frustrated at the club's failure to bring in more players during the last transfer window.

Marko Arnautovic's struck in the sixth minute to secure West Ham's win with his first since joining the Hammers in July in a club record £24 million (27.3 million euro) deal from Stoke City.

David Moyes' first win in his fifth game since taking over from Slaven Bilic came after another good display at Manchester City on Sunday, where they were edged late 2-1, but it was not enough to lift the club out of the bottom three ahead of their midweek visit from Arsenal.

"I think coming to the club I had a very difficult run of fixtures but today the game plan worked and we were very close at Manchester City.

"I went into the dressing room, congratulated the players, put my jacket on, and then thought 'oh no, it's Arsenal this week'.

"But that's how it is for managers."

Moyes, who is seeking to succeed where he failed with Sunderland last term in keeping the Hammers up, said he was working hard on the players fitness so they could see out the whole 90 minutes.

"I think our energy levels have improved massively but I definitely want to get more out of them," said Moyes.

"I don't want my forwards to think they can come off after 65 minutes although to be fair, Marko (Arnautovic) had a slight calf problem," added the 54-year-old Scot.