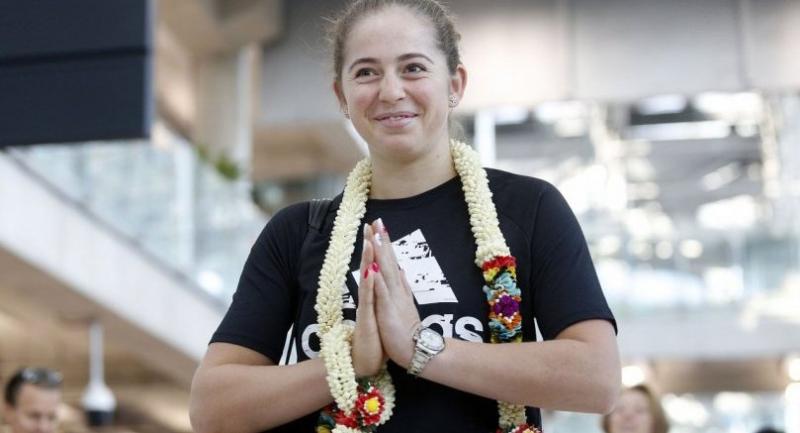 Jelena Ostapenko gives a wai at Suvarnabhumi Airport on Tuesday .

French Open champion Jelena Ostapenko of Latvia arrived in Bangkok on Tuesday for a tennis exhibition and a cooking lesson with Michelin-starred chef Jay Fai (aka Supinya Junsuta).

The world No 7, along with world No 1 Simona Halep of Romania,  No 4 Karolina Pliskova of the Czech Republic and No 9 Johanna Konta of Great Britain, will play a two-day exhibition in Hua Hin on Saturday and Sunday.

The 20-year-old Latvian, who became the first unseeded player to win Roland Garros since 1933, will use the event to kick-start her preparations for next month’s Australian Open in Melbourne.

“The conditions here are pretty much the same as in Australia.  So it’s a great place to prepare for the Australian Open,” Ostapenko said on arriving at Suvarnabhumi Airport.

The first Major champion from Latvia and her three rivals, who will arrive later in the week, will be engaged in a series of tourism promotional activities, including receiving a lesson on Friday on how to cook a Thai-style omelette stuffed with crab meat from,Jay Fai who recently won a Michelin star for her roadside restaurant.

The four players will also participate in an alms-giving ceremony on the beach on Saturday.

Tags:
French Open champion Jelena Ostapenko of Latvia arrived in Bangkok on Tuesday for a tennis exhibition and a cooking lesson with Michelin-starred chef