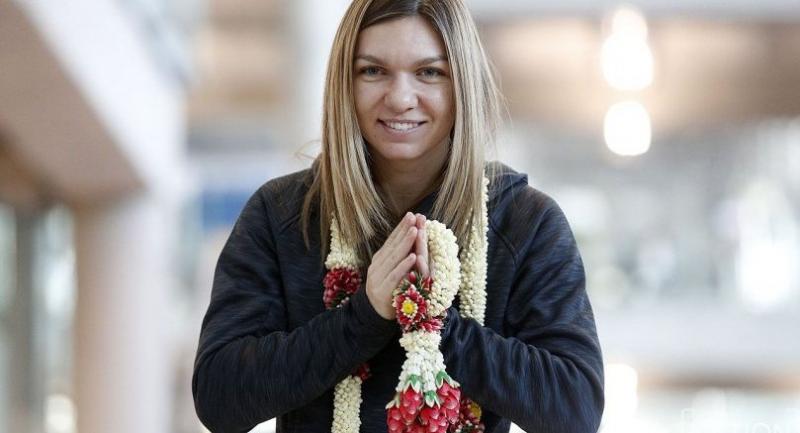 Simona Halep performs a Thai wai upon her arrival.

World No 1 Simona Halep hoped she could finally end the long wait for first Major victory as she arrived in Thailand yesterday for an exhibition match in Hua Hin this weekend.

The 26-year-old Romanian who came close at winning her first Grand Slam title twice at the French Open in 2014 and 2017 where she lost the finals to Maria Sharapova and Jelena Ostapenko respectively is one of the four top 10 players to take part in the friendly event.

“Every time when I go to a tournament like this, I always want to win but it won’t be easy as I just came back from  a month rest. It will be the first event after Singapore (WTA Finals) I hope to win every match,” said Halep who will be joined by world No 4 Karolina Pliskova of the Czech Republic, No 7 Ostapenko from Latvia and No 9 Johanna Konta of Great Britain.

Apart from the exhibition at the True Arena in Hua Hin, the four players will take part in several activities. But the highlight will be the cooking lesson with Michelin-starred chef Jay Fai (aka Supinya Junsuta) this morning in Hua Hin. Halep, Ostapenko and Konta will learn how to cook the famous menu Thai style rolled omelet with crab meat with the most talked about chef in Thailand at the moment. Pliskova however will miss the cooking as she is to arrive Thailand in the afternoon.

Halep and Konta will square off in the first friendly match at 6.30pm followed by the fight between the reigning French Open champion Ostapenko and the 2016 US Open finalist Pliskova.

On December 24, the foursome will visit several tourist spots in the beach resort before resume their tennis actions in the evening. The third place match is due at 6pm, followed by the final. A Christmas party is for the players after that.

Fans can watch live coverage of the exhibition at True670 while tickets, BT2,500 each, can be purchased at www.thaiticketmajor.com or call 032-909-633.