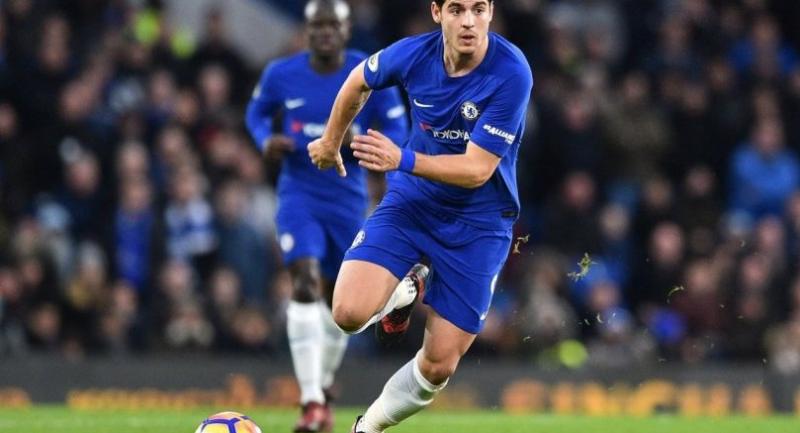 Chelsea's Spanish striker Alvaro Morata runs with the ball during the English Premier League football match between Chelsea and Brighton and Hove Albion at Stamford Bridge in London on December 26, 2017. / AFP PHOTO

London - Alvaro Morata struck his 10th goal of the Premier League campaign as Chelsea secured a 2-0 victory over Brighton that moved Antonio Conte's side to within one point of second-placed Manchester United.

After struggling to break down Chris Hughton's side during a poor first half, the Blues took control with Morata heading the opening goal immediately after the restart before Marcos Alonso added the second on the hour.

The home side dominated the second period and the margin of victory could have been much more convincing if Conte's team had taken their chances.

The game, though, provided further evidence of the importance of Morata to Conte's side, who struggled to break down Everton three days previously when the Spain international served a one-match suspension.

Conte wasted no time in restoring Morata to his starting line-up and the Chelsea head coach was forced into a change at the other end of the pitch with Gary Cahill coming in for Andreas Christensen, who was ruled out with illness.

Brighton arrived at Stamford Bridge having been lifted by the weekend win against Watford, their first victory in eight games.

But with meetings with Newcastle and Bournemouth -- both teams in the bottom half of the table -- to come over the holiday period, Albion manager Chris Hughton opted to make four changes to his line-up.

Saturday's matchwinner Pascal Gross was held back on the bench, along with winger Anthony Knockaert and skipper Bruno Saltor.

The changes, though, appeared to have little effect on Hughton's side, who quickly demonstrated they were capable of making life hard for Conte's men.

And had striker Tomer Hemed not mistimed his jump when he rose to meet Markus Suttner's cross, they might have taken an early lead.

Chelsea struggled to find their momentum although they should have gone ahead in the 19th minute when Antonio Rudiger headed Cesc Fabregas's cross into the path of Tiemoue Bakayoko, who stabbed the ball wide from just four yards out.

Fabregas was also the architect of Chelsea's other main chance during the opening 45 minutes when he chipped a pass into the path of Victor Moses as the wing-back sped into the Albion area before drawing a good save from keeper Mat Ryan.

Brighton held their shape and showed the defensive organisation that has underpinned their progress during the first half of the season.

Hazard was closed down quickly whenever he embarked on a run and Morata was well shackled by the Brighton centre-backs Lewis Dunk and Shane Duffy.

However, the visitors offered little going forward and when Chelsea made the perfect start to the second half, the outcome was never in question.

Conte was clearly unhappy with his side's first half display but the Italian could not have been more pleased with their response at the start of the second period.

Just 40 seconds had elapsed when Cesar Azpilicueta floated the ball over the Brighton defence towards Morata, whose close-range header was strong enough to beat Ryan despite the keeper getting his hand to the ball.

The pressure that had been building on the home side lifted immediately and Hazard almost added a second four minutes later when he sent a shot narrowly wide.

Ryan was then forced to twice deny Alonso, first from a free-kick and then when the left-back connected with a near-post header from the resulting corner.

A second goal was inevitable and it came in the 60th minute when Alonso finally found a way past Ryan, this time with a header from Fabregas's corner.

Brighton had barely got out of their own half and Chelsea should have killed the game off quickly but were guilty of failing to convert a succession of good chances.

Dunk pulled off a superb goalline clearance to deny Hazard and then Bakayoko produced his second miscue of the match when he sliced wide after being set up by Hazard's backheel.