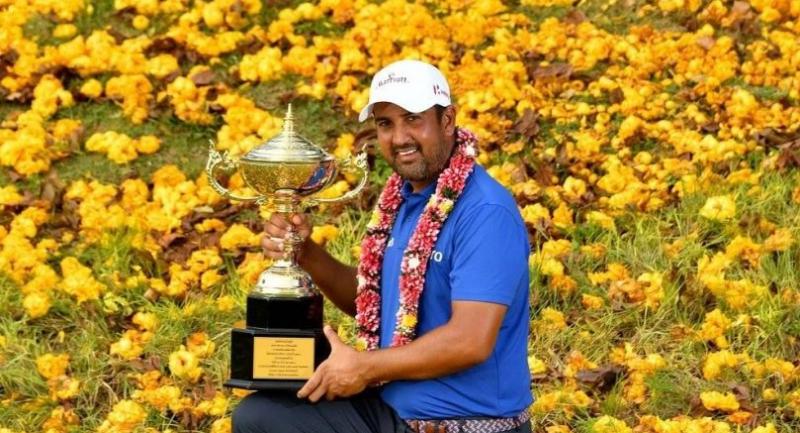 Indian Shiv Kapur came from two shots behind to beat local hope Prom Meesawat by one stroke to win the inaugural US$500,000 Royal Cup at the Phoenix Gold Golf Country Club on Sunday.

The 35-year-old from New Delhi rallied from back-to-back bogeys on the 13th and 14th holes with birdies in the next two holes to sign off with a 67 and edge the title on 14 under-par-270.

It was a third Asian Tour title of the year for Kapur, who won his maiden Tour title in Thailand 12 years ago and also had 2017 wins at the Yeander Heritage in Taiwan and the Panasonic Open in India.

“It was just lucky for me to make one putt better than him [Prom] in the end,” he said. “It’s been a great year for me to have won three titles.”

Apart from the US$90,000 winner’s cheque, however, Kapur and the rest of the 74-player-field will not receive ranking points for the Asian Tour or World Rankings because the Royal Cup was just an end-of-year bonus event.

The Asian tour ended with the Indonesian Masters a fortnight ago. Prom falls down on his knees after missing a birdie putt on the 18th hole.

Prom, who was looking for his third Tour win, missed an easy three-foot-par putt on the 17th and that cost him the title as he closed with a 70. His consolation was a cheque of US$55,000.

“It’s been a battle with Shiv. He was playing well while I made more mistakes in the end. I was a bit disappointed but it’s not bad to finish the year in second place,” he said.

Another Indian player, Gaganjeet Bhullar, carded a final-day 66 for a total of 11 under-par-273 and a third-place finish.

Tags:
Indian Shiv Kapur came from two shots behind to beat local hope Prom Meesawat by one stroke to win the inaugural US$500 000 Royal Cup at the Phoenix G