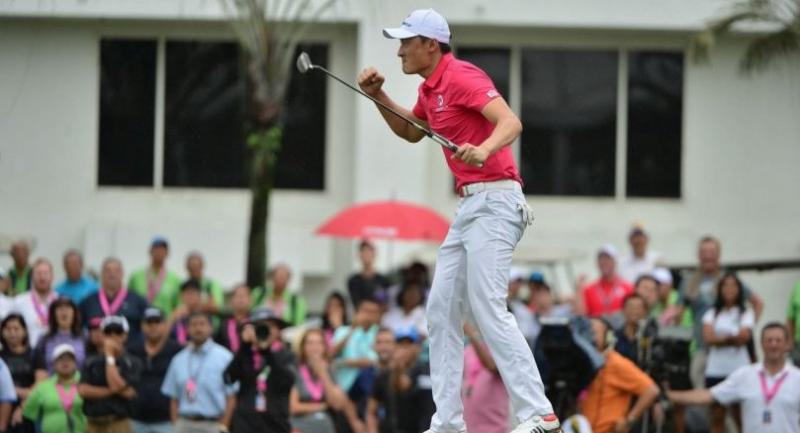 Shah Alam, Malaysia -  Li Haotong of China produced a gutsy birdie on the last hole to give Team Asia an edge over Team Europe heading into the Saturday Foursomes at the EurAsia Cup presented by DRB-HICOM.

The 22-year-old Li and Malaysia’s Nicholas Fung dramatically halved their match in the Fourball Format against Bernd Wiesberger and Rafa Cabrera Bello as Team Asia leads on 3 ½ points against Team Europe’s 2 ½ points at the Glenmarie Golf and Country Club.

Hideto Tanihara of Japan and Phachara Khongwatmai of Thailand, the youngest player on Team Asia at the age of 18, also secured victory on the 18th hole when they beat Alex Noren and Paul Dunne by two holes.

The pair of Kiradech Aphibarnrat and Byeonghun An lost their match to Tommy Fleetwood and Paul Casey 4&3 while Indian duo Anirban Lahiri and S.S.P. Chawrasia was beaten by Ross Fisher and Tyrrell Hatton 5&4.

Li and Fung were 2-up after the turn but Team Europe bounced back superbly to lead 1-up in their match when they birdied, eagled and birdied the 10th, 11th and 12th holes respectively before Li holed a 15-feet birdie on the 18th hole to snatch a late draw.

Debutants Saksansin and Kang got off to a hot start when they birdied the opening eight holes and completed a remarkable victory on the 14th hole.

Playing in front of his home crowd, Green delivered an important victory with his partner Ikeda as the Malaysian holed a 15-feet birdie putt on the par-three 17th hole to contribute a point to the team.

We started really strong and made eight birdies in the first eight holes.  We tried not to lose focus and after that finished strong, so it was a wonderful day.

Even in the practice rounds I was having a very hard time reading the greens.  So every single putt before I hit it, I asked (Poom), where do you think it's going to go and I just listened and there's no doubt, it goes in.

Yeah, we didn't really make that many long putts. He probably made the longest putt on the last hole and I hit it to about seven or eight feet.

It's going to be a totally different game tomorrow.  The course is not long, so the main key is keep it in play and you've got to hit a lot of fairways.  Plus we're hitting a lot of short irons.

If it gets sunny or hotter, I think it will be good for Asia.  The greens, it will be harder to read the breaks.  I don't think the European guys are really used to hot and humid weather.  So, hopefully if the sun comes out tomorrow and it gets a little bit hot and it will be good for us.

Very happy to help the Asian team to create a new record, and hopefully I can continue in the next two days. I think I make a lot of birdies today.  I played very well and made a lot of putts. I’m very happy on the final hole to make a putt to square the game. I was quite happy with the way we started. I played well the whole day, and I was under a lot of pressure on the first hole. But I really didn’t want to lose so this is a very, very good feeling.

Yeah, it was nothing crazy, actually.  I was just hyped up in front of the home crowd and first tee.  It was good and fun.

Yeah, I think we stuck to our pairings because we're comfortable with the players we're with, and you know, I think Arjun just said, "Let's keep going.  We're not stopping now."  We're going to keep it down and hopefully win more points.

Obviously experience plays a big part but at the same time it's a different ballgame, match play.  You make nine and the other person makes three; that’s only one. You win the hole, it doesn't mean anything.  You win one hole.  You've got to keep going, I feel like.  It can switch really quick.

Like we were 2-up through 11 and it switched right back.  We were all square going to 15, so it can switch pretty quick.

I hit it on my line (birdie putt on 17), and you know, it stuck to the line that I was looking at and it dropped in.  It was probably one of the best feelings I've had in a while.  You know, to do it for my group and Team Asia, it's great.

I'm very happy to get a point for Asia, but I learned a lot this week and this match because when I start, I'm nervous and Tanihara tell me just make birdie and don't think about anything. After that, I played so good, and that's why I’m in this press conference.

This is my first time playing in the EurAsia Cup and after four or five holes, it felt easy and Tanihara taught me a lot. I was quite nervous on 18 but I knew that my teammate can make birdie and he did it.

Tags:
Shah Alam Malaysia -  Li Haotong of China produced a gutsy birdie on the last hole to give Team Asia an edge over Team Europe heading into the Saturda