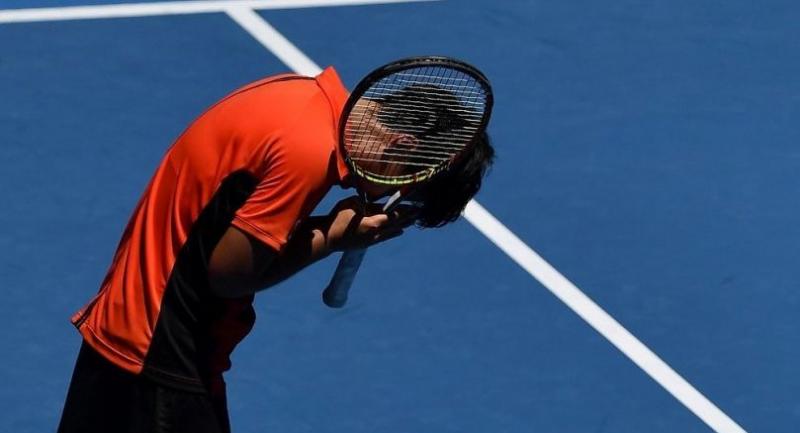 Thailand's Luksika Kumkhum celebrates her victory against Switzerland's Belinda Bencic during their women's singles second round match on day three of the Australian Open tennis tournament in Melbourne on January 17, 2018. / AFP PHOTO

LUKSIKA KUMKHUM became the second woman in Thai tennis history to reach the third round of a Grand Slam tournament when she stunned former world No 8 Belinda Bencic of Switzerland 6-1 6-3 in the Australian Open second round yesterday.

The 24-year-old from Chanthaburi outplayed the error-prone Swiss, who had eliminated Venus Williams in the first round in just 68 minutes.

In the process, she became the second Thai to reach the round of 32 in a Major after Tamarine Tanasugarn, who progressed to this same stage at Melbourne Park in 1997.

With three wins from the qualifying stage and two from the main draw, Luksika will return to the top 100 this week from No 124, when the new WTA rankings are released on January 29.

She reached a high of No 85 back in October 2014. Although Bencic entered the match as the favourite with 16 straight wins, including a stunning victory over former world No 1 Williams, Luksika proved superior in her serving, groundstrokes and court coverage. The pressure seemed to tell on Bencic, who unleashed a barrage of errors. The 78th-ranked Swiss broke the Thai at the start of the match but Luksika traded blows with her big-hitting opponent to reel off four straight games and lead 4-1.

Bencic served a double fault to give the Thai another break at 5-1.  Luksika fought off a break point to take the opener, firing 13 winners in 34 minutes.

After a long deuce, Luksika broke her rival to gain the upper hand at| 3-2 in the second set, while errors poured from Bencic’s forehand and backhand. The Swiss was so upset that she threw down her racquet and promptly got a warning from the chair umpire.

The players then launched into a string of fierce rallies but it was the more consistent Thai who dictated play until the end.

“I’m really happy to reach the third round in a Grand Slam for the first time,” said Luksika, whose previous best in a Major was two back-to-back second rounds in Melbourne in 2013-14.

“I kept telling my family, my coach and friends that I would try to reach the third round in a Grand Slam. I did it today,” added Luksika during the on-court interview.

“Thank-you for the support, Thai and Aussie fans. “I was quite confident with my shots and was playing better than in the first round as there was no wind. Actually I was the underdog. After the first set, I tried not to think about the set in order to stay focused and played point by point,” she added.

Luksika will next face Croatian world No 89 Petra Martic, who upset world No 43 Irina-Camelia Begu of Romania 6-4 7-6 (7-3), on Friday. The Thai beat the Croatian 3-6 6-3 6-1 in their only career meeting on an indoor carpet surface in Taiwan five years ago.

“There’s still a long way to go. The next round is still tough. I hope to maintain this form and keep moving forwards,” Luksika said. However there was bad news for Thailand in the men’s doubles where Sonchat and Sanchai Raiwatana went down to Pablo Andujar and Albert Ramos-Vinolas of Spain 4-6 4-6 in the first round.

Tags:
LUKSIKA KUMKHUM became the second woman in Thai tennis history to reach the third round of a Grand Slam tournament when she stunned former world No 8