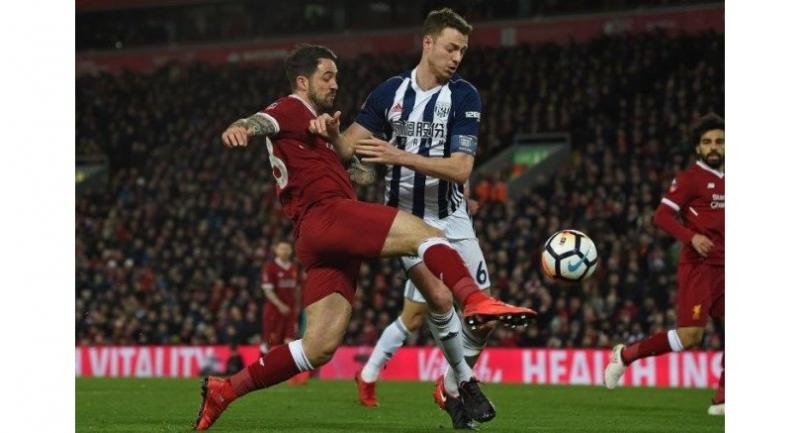 A remarkable first half on Merseyside saw the Baggies, second-bottom in the top flight, race into a 2-1 lead inside 11 minutes against a Liverpool team pushing for a place in the Champions League.

Roberto Firmino put Liverpool ahead in the fifth minute after a mix-up, only for Rodriguez to hit back with two well-taken goals.

VAR, being trialled in English cup competitions this season, then took centre stage.

Pawson then become the first English referee to consult a touchline monitor himself before awarding Liverpool a penalty for a foul on Mohamed Salah by Jake Livermore.

That prompted furious protests by the visitors, with Barry booked for dissent, only for Firmino's spot-kick to hit the crossbar.

There was yet another VAR review prior to the break, before a Joel Matip own goal that put West Brom 3-1 up was allowed.

"I thought we deserved what we got today," West Brom manager Alan Pardew told BT Sport.

Pardew, reflecting on the VAR stoppages, said: "I don't know, it was just weird. We waited so long for the decisions, the stadium was flat and every goal was becoming a sort of mockery with the delayed decision."

Meanwhile beaten Liverpool manager Jurgen Klopp insisted: "West Brom deserved it, they scored three goals, us only two, and we have to blame ourselves."

But eight minutes from time, England striker Kane equalised when he tapped in from close range following Son Heung-Min's flick-on for his 30th goal this season.

And 1-1 was how it finished as League Two Newport survived four minutes of injury-time to hold out for a lucrative replay at Wembley, Spurs' temporary home.

Welsh side Newport, a massive 72 places behind a Spurs side who are fifth in the Premier League, sparked delirious scenes at Rodney Parade when Amond headed them into a 38th-minute lead.

"I'm gutted... We were nearly there," Newport manager Mike Flynn told the BBC.

"I hope we have learned today that we have to fight to win things," he said.

West Ham manager David Moyes labelled Arthur Masuaku "despicable" after the midfielder was sent off for spitting in a 2-0 defeat by 2013 FA Cup winners Wigan.

Premier League West Ham, already 1-0 down to the first of two goals from Will Grigg, were reduced to 10 men early in the second half when Masuaku saw red for spitting at third-tier Wigan's Nick Powell.

"It was despicable," said Moyes. "If you do that, then you're going to get the punishment in any walk of life."

Nottingham Forest's FA Cup run ended just one round after they knocked out holders Arsenal courtesy of a 2-1 defeat by Championship rivals Hull.

Chelsea face Newcastle in another all top-flight clash on Sunday when league leaders Manchester City continue their bid for an unprecedented 'quadruple' away to second-tier Cardiff.

Manchester United eased into the fourth round on Friday, with new signing Alexis Sanchez impressing on debut in a 4-0 win at lowly Yeovil.

Tags:
London -  Jay Rodriguez scored twice as West Bromwich Albion stunned Liverpool with a 3-2 FA Cup fourth-round win at Anfield on Saturday in a tie over