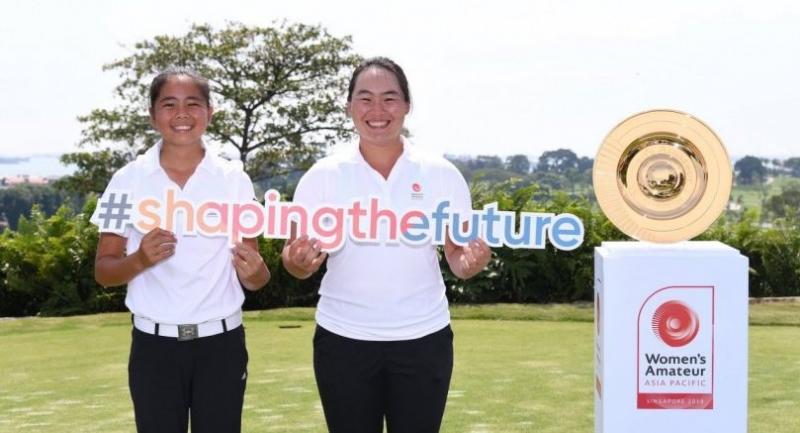 Two Singaporean amateur golfers competing in next month’s Women’s Amateur Asia-Pacific championship were the first to get their hands on the silverware on Tuesday, while unveiling the new trophy at host venue, Sentosa Golf Club.

Singapore’s top ranked amateur, Callista Chen, and compatriot Shannon Tan will be amongst 84 players representing 17 different countries competing for the title when the inaugural championship gets underway on the New Tanjong course from 21-24 February.

The winner will receive invitations to play in two major championships in 2018 – the ANA Inspiration at Mission Hills Country Club in California, USA; and the Ricoh Women’s British Open at Royal Lytham & St Annes Golf Club in Lancashire, England – as well as a berth in the prestigious HSBC Women’s World Championship on the same course, the following week.

Speaking about the challenge that lies in wait, 19-year-old Chen, winner of the Faldo Series Singapore Championship in 2017, said: “I’m very much looking forward to playing in the Women’s Amateur Asia-Pacific. It’s a once in a lifetime opportunity, and seeing the trophies today brings the dream to life.”

The championship has also extended an invitation to rising star, Shannon Tan. The 13-year-old, who won Singapore’s 2017 Warren Amateur Championship, added: “I’m delighted to have the opportunity to play in the Women’s Amateur Asia-Pacific with the region’s best amateurs.  I just want to go out there and play the best I can.”

Speaking about the local contingent’s prospects in the championship, Lyn Sen, President of the Singapore Ladies Golf Association, said: “It will certainly be a challenging week for our young team with so many world class golfers, but with six players representing Singapore, I am confident someone will put their hand up and rise to the challenge.

“This is golf. If one of them can put together their best four rounds ever, it will change her life forever. They've been training hard and they are looking forward to taking on the best players in the Asia-Pacific,” added Sen.

The trophy was unveiled alongside the trophies for the ANA Inspiration, Ricoh Women’s British Open and HSBC Women’s Word Championship at the Pyramid at Sentosa Golf Club – an elevated vantage-point on the New Tanjong course with views to the clubhouse in one direction and across to the city in the other.

Dominic Wall, Director - Asia-Pacific at The R&A, said: “With just over three weeks to go to the inaugural championship, we’re very excited. The field has come together very well and will undoubtedly see some of the future stars of the game playing here at Sentosa. The New Tanjong course is in excellent shape, and we now have a stunning trophy for the players to compete for. We’re looking forward to it immensely.”

The Women’s Amateur Asia-Pacific championship has been developed by The R&A and Asia-Pacific Golf Confederation (APGC) to provide a pathway for Asia’s elite female amateurs to the international stage. The championship will be contested over four rounds of stroke play from 21-24 February 2018.

Tags:
Two Singaporean amateur golfers competing in next month’s Women’s Amateur Asia-Pacific championship were the first to get their hands on the silverwar