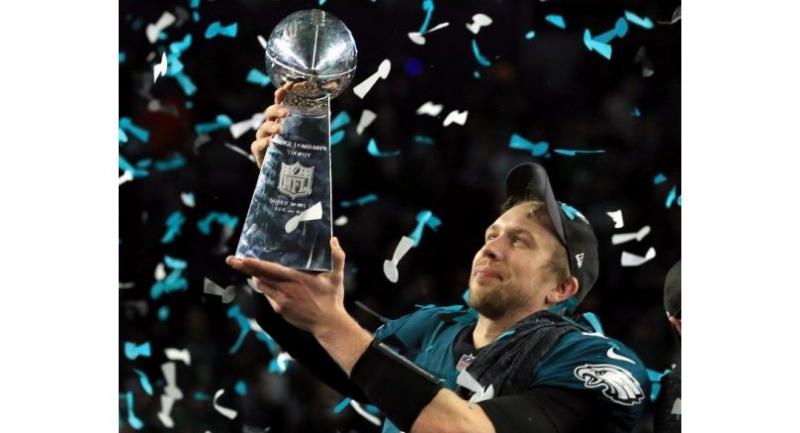 Nick Foles #9 of the Philadelphia Eagles celebrates with the Lombardi Trophy after defeating the New England Patriots 41-33 in Super Bowl LII at U.S. Bank Stadium on February 4, 2018 in Minneapolis.

Minneapolis - The Philadelphia Eagles stunned the New England Patriots with an upset 41-33 victory to claim their first Super Bowl on Sunday after a late Tom Brady fumble ended the veteran quarterback's tilt at history.

Eagles quarterback Nick Foles -- who started the season as a back-up and had considered retiring from the NFL two years ago -- was named MVP after a magnificent performance that saw him throw for three touchdowns and 373 yards.

Foles' fairytale starring role laid the foundation for a victory which sparked jubilation in Philadelphia as thousands of fans took to the streets to celebrate.

"I am speechless," said Foles, who was named MVP. "To be part of this organisation, to be in this moment is something you dream about as a kid. We have been wanting this for a long time, and I am just blessed to be a part of it."

Cannons shooting confetti in the green and silver colours of the Eagles exploded all over Minneapolis' US Bank Stadium.

Philadelphia's unofficial anthem -- the theme from the Sylvester Stallone "Rocky" movies -- belted out to the delight of fans celebrating an ending worthy of the Hollywood franchise.

The Eagles had been heavy underdogs heading into Sunday's NFL showpiece, with the pre-game narrative focusing on the 40-year-old Brady, who was chasing a record sixth title.

But although Brady produced a record-breaking performance -- throwing for 505 yards and three touchdowns -- it was his fumble from a strip sack with just over two minutes left that is destined to be remembered.

Foles had given the Eagles a 38-33 lead shortly beforehand after finding Zach Ertz in the end zone.

The stage was set for Brady, who had dominated the Eagles' defense in the second half, to mount one of the game-winning late fourth quarter drives that have become his calling card throughout his career.

Brady, who had been bidding to become the oldest quarterback to win the Super Bowl, sat on the turf in disbelief as the Eagles celebrated the decisive play of the game.

Philadelphia took over possession and saw Jake Elliott kick a 46-yard field goal to take an eight-point lead at 41-33.

There was still a minute left for the Patriots to launch one last drive.

But Philadelphia were not going to be denied, and a desperate Brady Hail Mary failed to find a receiver as the clock ran out.

A shell-shocked Brady later insisted the defeat would not alter his intention of continuing to play on next season.

"I expect to be back," he told reporters. "I don't see why I wouldn't be back," adding that losing "sucks".

"It's tough to lose these games. You play to win and sometimes you lose. Disappointed. Wish we could have done a better job."

Graham meanwhile could not hide his delight after the decisive play that won the game and vanquished Brady.

"We knew we were going against the best," he said. "How much sweeter it is that we beat the best today."

Yet the night belonged to Foles, who had only come into the Eagles' starting line-up in December after a season-ending injury to star quarterback Carson Wentz.

Foles could, unusually, find himself without a job next season if he remains at the Eagles as a back-up.

Eagles coach Doug Pederson meanwhile had never coached in a Super Bowl before and was coming up against the might of Patriots counterpart Bill Belichick, the most successful coach in NFL history.

The Patriots had fought back from deficits of 15-3 and 22-12 at half-time to edge into the lead in the fourth quarter by 33-32 when Brady picked out Rob Gronkowski for the go-ahead score.

But Foles, 29, showed a veteran's composure to lead the Eagles back down the field for a touchdown to restore Philadelphia's lead.

The score came when Foles hit Ertz in the end zone. There was an agonising wait as the touchdown was reviewed amid uncertainty that Ertz had made a fair catch, before it was finally confirmed.

The Eagles had scored first half touchdowns through Alshon Jeffery and LeGarrette Blount before Foles himself went into the end zone after a clever trick play just before half-time.

The Patriots scored a first half touchdown through running back James White but had been dealt a blot when receiver Brandin Cooks was poleaxed in a brutal hit by Malcolm Jenkins.