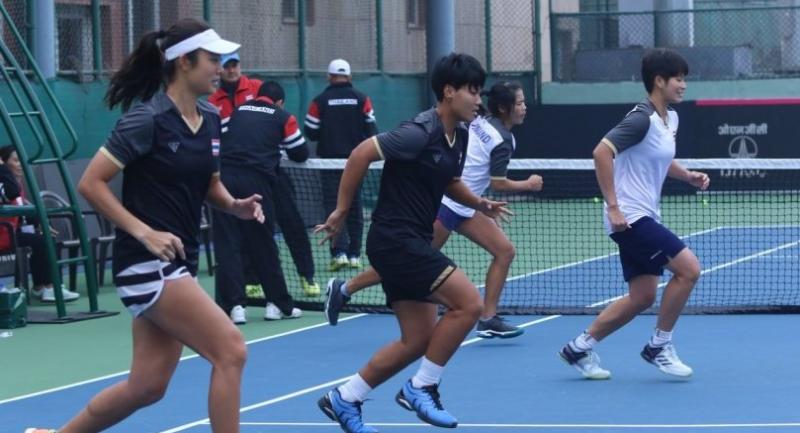 Luksika Kumkhum, wearing the dark kit in the centre, and her Fed Cup teammates go through their training drills on Tuesday.

A Herculean task faces Thailand on Wednesday as the Kingdom’s female tennis players open their campaign against heavy favourites Japan in a Fed Cup Asia/Oceania Qualifying Group I tie in New Delhi.

Despite the presence of Thai No 1 Luksika Kumkhum, Thailand, drawn in pool B which also includes Taiwan and South Korea, will have to exceed all expectations to negotiate this hurdle.

Luksika is up there, too, with a world ranking of 101 but her teammates Peangtarn Plipuech and Nicha Lertpitaksinchai are not even in the top 200.

Luksika who got home fans excited last month when she became the second Thai after Tamarine Tanasuagrn to reach the third round of the Australian Open women’s singles, will take on Hubino in the first rubber.

It will be a rematch of their 2016 clash, which the Japanese won in three sets.

“Thai and Japanese players are quite familiar with each other. Hubino is very consistent at the baseline but at the same time can attack as well. I need to play high-quality tennis to tackle her,” said Luksika.

The Thais have yet to reveal the second singles players – it is likely to be either world No 230 Peangtarn Plipuech or Patcharin Cheapchandej – while Luksika and Nicha Lertpitaksinchai are the likely choice for the doubles.

Thailand will then take on Taiwan tomorrow and South Korea on Friday to round off the pool stage matches. Pool A comprises of host China, Kazakhstan, India and Hong Kong.

The winners of each pool will play off against one another to determine which nation will advance to the World Group II play-offs in April.

The teams that finish third in each pool will play off against the nations finishing fourth in the other pool (A3 v B4 and B3 v A4).

The losers of those two matches will be relegated to Asia/Oceania II in 2019.