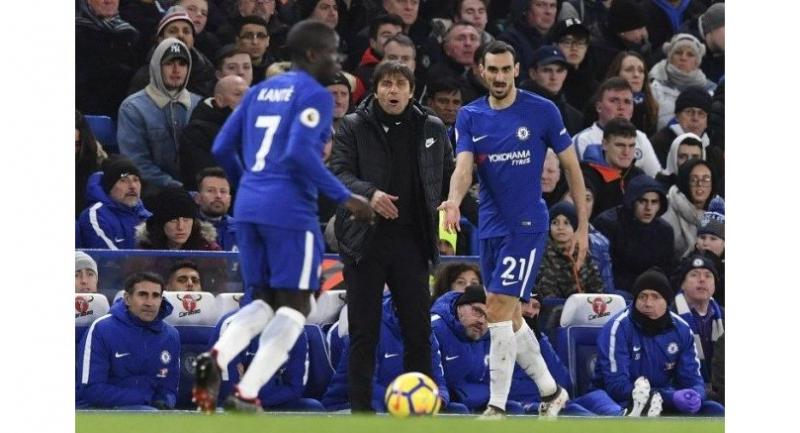 Antonio Conte thanked the Chelsea fans for their loyal support as Eden Hazard's double eased the pressure on the Italian with a 3-0 win over rock bottom West Brom on Monday.

Three-goal thrashings at the hands of Bournemouth and Watford saw odds slashed on Conte becoming the latest Chelsea boss to be dismissed just nine months on from winning the Premier League.

However, Conte's name was sung loudly around Stamford Bridge as the brilliance of Belgian Hazard either side of a second-half strike from Victor Moses moved Chelsea back into the top four.

"I think they are reading speculation, rumours on me, and for sure I am grateful to the fans for supporting me this way," said Conte.

"Maybe in this year-and-a-half they understand my patience and will to defend this colour, this shirt, this badge."

Chelsea climbed into fourth with the gap between Manchester United in second and fifth-placed Tottenham Hotspur now just four points in the race to join runway leaders Manchester City in next season's Champions League.

"It's not easy to lose two games but now we are back," said Hazard. "We are Chelsea, we are the champions, we have to give everything."

At the other end of the table, a third straight defeat is another huge blow to West Brom's chances of survival with the Baggies now seven points adrift of safety and just 11 games remaining.

"We are going to fight until the end," said Baggies boss Alan Pardew.

"The games coming up, looking at the calendar, this is our period. But it is not good saying they are good games, you've got to win them and that's something we haven't managed to do for a long time."

Crucially for Chelsea ahead of a huge month on three fronts, Conte's forward options were replenished as Olivier Giroud was handed his full debut, whilst club record signing Alvaro Morata made his return as a second-half substitute after nearly a month out with a back injury.

West Brom were dealt an injury blow themselves inside three minutes when former Chelsea striker Daniel Sturridge limped off to be replaced by Jay Rodriguez.

Pardew insisted he had no problem fielding Rodriguez, who was charged by the FA on Thursday with using racist language towards Brighton's Gaetan Bong last month, but has vowed to clear his name.

Rodriguez had by far the best chance of a bright start from the visitors when he latched onto Moses's wayward defensive header, but dragged his shot wide with just Thibaut Courtois to beat.

Giroud passed up a huge opportunity to mark his Stamford Bridge bow in Chelsea blue with a goal when his weak right-footed effort was easily smothered by goalkeeper Ben Foster on 20 minutes.

But the French international made amends by providing the pass for the opener as a neat one-two opened the space for Hazard to fire his 14th goal of the season into the bottom corner.

West Brom only had themselves to blame for not getting back into the game early in the second period.

Salomon Rondon fired too close to Courtois after outmuscling Andreas Christensen despite Chelsea claims for a foul on the Dane.

And, from the resulting corner, Jonny Evans headed inches over the bar.

Moments later, Pardew's men were 2-0 down as Moses latched onto Cesc Fabregas's deflected pass to slot low past Foster.

Hazard then capped a welcome win when he cut inside before drilling a left-footed shot inside Foster's near post.

The serenading of Conte then began, but far tougher tests await following Hull City's visit in the FA Cup on Friday.

Firstly, Barcelona visit the Bridge in the Champions League last 16 in eight days time before back-to-back Premier League visits to Manchester to face United and City.