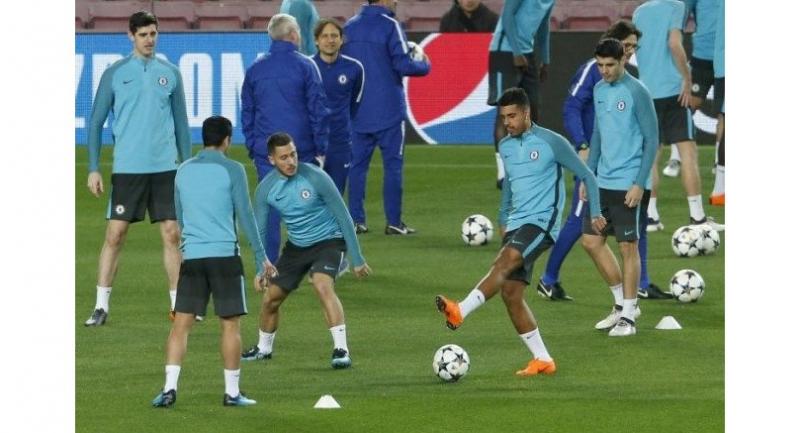 Chelsea's Brazilian defender Emerson Palmieri (2R) controls the ball during a training session at the Camp Nou stadium in Barcelona on March 13, 2018.

Antonio Conte's Chelsea will aim to frustrate Barcelona in the second leg of their Champions League last-16 tie on Wednesday but they may find an opponent less expansive than they expect.

Barca have set the standard in recent years for the most glittering style of football but Ernesto Valverde has instilled a new style this season, built on resilience, organisation and hard graft.

With Lionel Messi and Luis Suarez left to their own devices up front, Barcelona's midfield has become more conscientious and its back-line harder to breach.

Atletico Madrid, as much renowned in defence as Barca have been in attack, have conceded only one goal fewer than the Catalans in La Liga all season.

Chelsea, however, enjoyed success at Stamford Bridge with a dogmatic approach, when only Messi's equaliser spoilt what was otherwise a controlled Blues performance. Willian's opener means Conte's side take a 1-1 draw to the Camp Nou.

"We come to do exactly the same job as we did at Stamford Bridge," Willian said on Tuesday.

"Without the ball we have to stay compact like we did at Stamford Bridge, we have to do the same job. We know here the pitch is big and we have to stay together and to not concede goals and go for the counter attack as well."

But it remains to be seen how bold Barca will be. They beat Atletico 1-0 at home earlier this month to move eight points clear at the top of the table but it was not an eye-catching display.

With Philippe Coutinho ineligible, Paulinho is likely to start against Chelsea, and the midfielder will bring athleticism and energy in place of Coutinho's creative spark.

Barcelona may be happy to play Chelsea at their own game, sustained by their crucial away goal and confident that, given the chance, Messi and Suarez can land the knock-out blow.

Captain Andres Iniesta will be key and the Spaniard appears to have won his battle to be fit after recovering from a hamstring strain. He was included in Valverde's squad on Tuesday.

"We know what Andres brings to the team, not only on the pitch but as a captain," Barcelona midfielder Sergio Busquets said.

"You give him the ball and he always knows what he has to do to create chances."

Conte conceded Chelsea would have to play the "perfect game" to reach the quarter-finals and they will need Eden Hazard to deliver too.

Hazard has grown frustrated in recent weeks with his lone role up front but when asked to compare the 27-year-old Belgian with Iniesta -- who will soon be 34 -- Conte seemed to lay down a challenge.

On the impact of Iniesta's possible return, Conte added: "I like to compare him with Andrea Pirlo. We are talking about a genius of the football."

Barca are still unbeaten in La Liga and Messi will be well-rested, having sat out Saturday's win over Malaga to attend the birth of his third child.

The Argentine arrives with five goals in his last four games.

"He will be fine," Busquets said. "In fact he will be more motivated than what we are used to and physically he is going to be great, after having an extra game's rest. I hope that this is perfect."