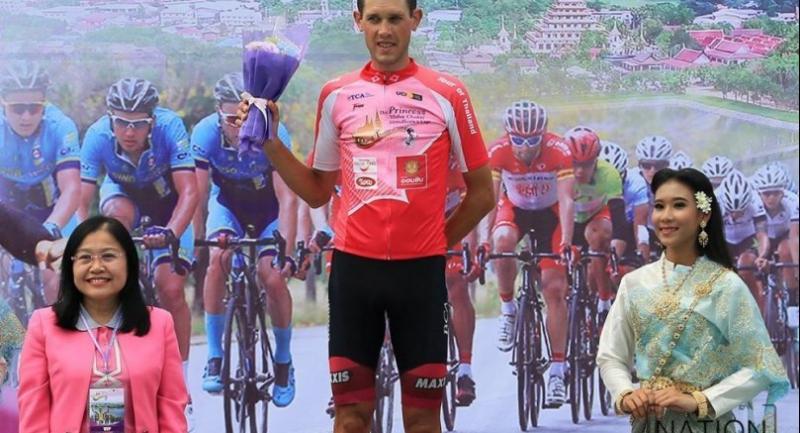 Benjamin Dyball of Australia won the overall title in the Princess Maha Chakri Sirindhorn’s Cup Tour of Thailand on Friday, despite trailing in 50th in the sixth and final stage to Khon Kaen.

The 28-year-old Dyball, of the St George Continental Cycling team, was in a bunch sprint to the line and did enough to claim the Pink Jersey for the title in a time of 24.01.04, followed by Artem Ovechkin of Malaysia’s Terengganu Cycling Team, on 24:00.20 and Thomas Lebas of Japan’s Kinan Cycling Team in 24:00.22. Benjamin Dyball, middle, during the race.

The Australian confirmed his fine form of 2018, having also finished third in the Tour of Langkawi last month. This was his first title since the Tour of Tasmania in 2016. Also it was his first Union Cycliste Internationale (UCI) title.

"I'm very relieved and happy to have held onto the leaders jersey. This is my first UCI tour win so it means a lot to me," said Dyball who will enter a few smaller races in Australia and a the next UCI race called Tour of Kumano in Japan. Team Illuminate’s Martin Lass, 24, won his third straight stage, clocking 2:23.15 hours for the 110km from Roi Et. He also earned the Green Jersey as the winner of the Best Sprinter category. However, the Estonian, winner of the 2014 Tour of Estonia, was not even in the top 50 overall after finishing 108th in his least favourite hilly conditions at Khao Yai in Nakhon Ratchasima on Tuesday. Sarawut Sirironnachai, middle, and his teammates during the award presentation.

Sarawut Sirironnachai, of the Thailand Continental Cycling team, earned the Purple Jersey as Best Asean Rider with a total time of 24:03.13 hours, followed by teammate Turakit Boonratanathanakorn (24:03.19) and Keerati Sukprasert (24:03.24).

Sarawut also helped his team to the Best Asean Team title with a three-man time of 72:10.08 hours, followed by the KFC Cycling Team of Indonesia and 7eleven-Cliqq Road Bike.