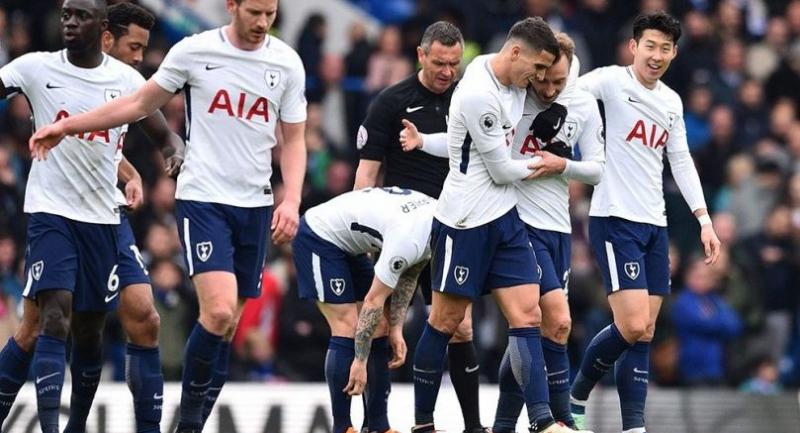 It may be too late to stop Manchester City's march to the Premier League title, but Tottenham Hotspur can further delay the title party and further embolden challengers next season by inflicting a fourth straight defeat on Pep Guardiola's men on Saturday.

City have suffered their worst week since Guardiola took charge with three successive defeats for the first time under the Catalan coach.

Liverpool romped into the Champions League semi-finals 5-1 on aggregate win by winning both legs of their quarter-final, whilst City also blew a two-goal lead and the chance to win the title against local rivals Manchester United in losing the Manchester derby 3-2 last weekend.

The champions-elect still boast a 13-point lead at the top of the Premier League with six games remaining.

And they could even be crowned as early as Sunday with victory at Wembley allied to defeat for United at home to West Brom.

City thrashed Spurs 4-1 when the sides met earlier in the season in the midst of a record 18-game winning run that amassed their commanding lead at the top of the table.

However, by conceding eight times in three games, Guardiola's men unveiled a weakness that hadn't been exposed by their Premier League rivals for the vast majority of the season.

Liverpool's bold approach has contrasted to most when faced with the might of City's attacking arsenal and Jurgen Klopp has been rewarded with three wins in four meetings with the runaway Premier League leaders this season.

Likewise, United scored three times in 16 minutes once forced to attack by a half-time deficit that could have been far greater had the hosts taken their chances.

City also looked like a side running out of gas as they let half-time leads slip away twice in the past week after blistering first-half performances.

"The exceptional thing has been 10 months winning, winning, winning and losing just one game," said Guardiola, whose side need two wins to guarantee themselves the title.

"Now we have a mini-league for six games and we are going to try and close it."

Elimination at the quarter-finals of the Champions League in particular soured a hitherto stunning season from City as their wait to conquer Europe continued despite amassing a squad worth an estimated 853 million euros (£747 million, $1 billion) in transfer fees alone.

However, Guardiola believes delivering the first Premier League title of his reign was the priority for his second season in charge.

"After Tottenham we have one week long week to Swansea, one long week to West Ham just to win the two games to win the most important competition. The Premier League shows how good you are every three days."

Whilst Spurs were torn apart at the Etihad in December, Mauricio Pochettino's men have also shown no fear in their previous meetings with Guardiola's City.

Spurs inflicted Guardiola's first defeat in English football in a thoroughly deserved 2-0 win at White Hart Lane last season, and can solidify their place in the top four by inflicting more pain on City.

Pochettino's men hold a 10-point lead over fifth-placed Chelsea, but insists his ambition is to succeed City as champions next season.

"We are in the race for top four and that for Tottenham is a massive achievement to finish in the top four for the third season in a row," said Pochettino on Thursday.

"That is so important, but the ambition is to win titles and one day the Premier League or Champions League."