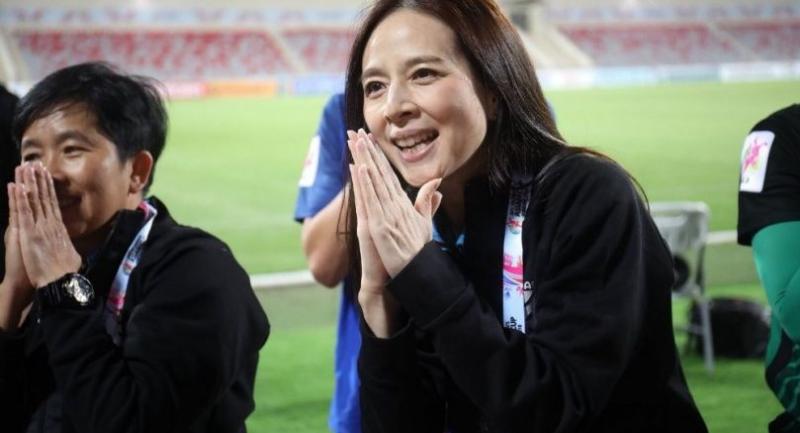 National team manager Nualphan Lamsam praised her side that they already won the hearts of the Thai fans after losing a thriller to Australia in a 2-2 (3-1) shoot-out during the semi-finals of the  AFC Women’s Asian Cup in Jordan on Tuesday.

Thailand after causing a hype all over the Kingdom by booking their slot into the  2019 World Cup for the second straight time following a 3-1 win over the Philippines in the group stage last week put up a gutsy fight against the 2010 champions only to come short in the sudden death.

However team manager Nualphan was more than happy to see a great fight from her players although Thailand failed to reach their second Asian Cup final since their first in 1983.

“I feel so proud and overwhelmed by the performance of the players. For me we are the winners and I’m sure they captured the hearts of the fans back at home as well,” said Nualphan who would reward her team Bt20 million incentive money for successfully qualifying for the World Cup Final.

“Actually Australia are stronger than we are in several areas. Many people even predicted that we would lose badly. But the girls already proved that anything could happen if they worked as a team,” added Nualphan, chairperson of the Thai League’s Port FC.

The manager also viewed that competing with pressure free attitude was the key factor that inspired extraordinary performance from the players.

“As we already qualified for the World Cup, we have nothing to lose in the last two games (semi-final and third place play-off) which are our bonus. Several young players did a great job even they were sent to play for the first time,” she said.

Thailand will face China in the third place game on April 20 at 8.45pm Bangkok time. Thailand already lost to China 0-4 in the group stage on April 6. Australia will play Japan in the final also on April 20.

“I hope the girls will maintain this level of play and produce some stunning result against China to surprise the fans,” Nualphan said.

Tags:
National team manager Nualphan Lamsam praised her side that they already won the hearts of the Thai fans after losing a thriller to Australia in a 2-2