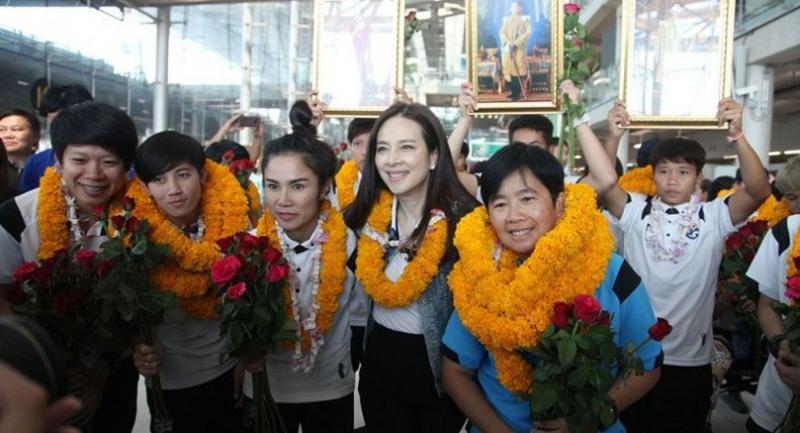 Thailand coach Nuengrutai Srathongvian has vowed to lead her women’s team into the World Cup Finals round of 16 after they lost to China in the AFC Women’s Asian Cup third place play-off in Jordan.

After finishing second in the group stage to earn a berth at the 2019 World Cup Finals in France, Thailand lost a hard- fought semi-final game to Australia in a penalty shoot-out 2-2 (3-1) and then to China (3-0) to finish fourth.

Nevertheless, reaching the semi-finals was still the best result achieved by the Thai women since they also reached the last four in 1983.

Nuengrutai said that while she had hoped for a better outcome they had suffered due to loss of several key players to injuries.

‘Our players are still tired from the semi-final match with Australia, we had to rest some experienced players and replaced them with younger ones,” said the 46-year-old coach.

“But the bottom line is we achieved the primary target of winning a spot at the World Cup Finals. Also our players have improved their performance by playing close matches with stronger teams.”

Thailand, also under Nuengrutai, made their first appearance at the World Cup in Canada three years ago but failed to get beyond the group stage. Improving on that in France is therefore their next target.

“We definitely want to do better than last time, which is to reach the round of 16. But to achieve that we have to improve the physical strength of our players first,” said Nuengrutai.

Due to the height disadvantage of her players, the Thai coach said they needed to strengthen their physical condition in order to be able to take on powerful teams like Australia and China. “They need to be faster and tough enough to deal with the taller girls,” she said.

In addition to their fitness, Nuengruthai said her players also had to fix some of their technical skills, such as how to deal with high crosses, especially from corners.

The more pressing task, meanwhile, is for several injured players, including goalkeeper Waraporn Boonsing, to recover in time for the Asian Games in Jakarta in August.