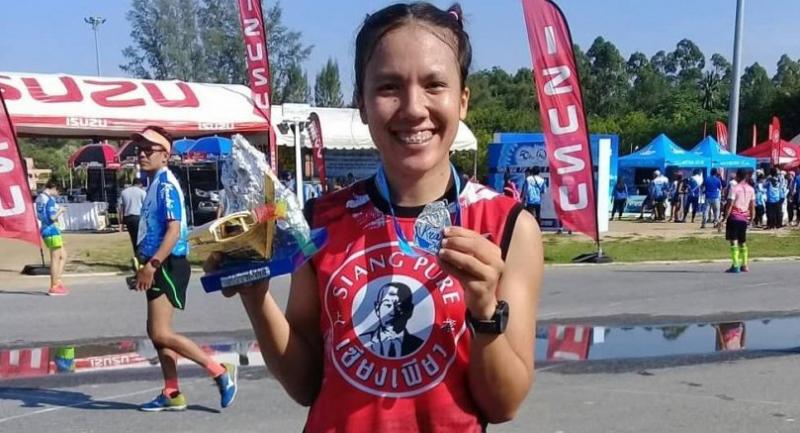 Krabi - Race favourite Wipawee Pratumsuwan racked up yet another title, clocking 1:36.34 hours to win the women’s 21k at the Bangkok Airways Krabi Half Marathon on Sunday.

The 27-year-old assistant teacher, who spends most of her weekends competing, clocked eight minutes faster than runner-up Siriphat Bootjen, who crossed the finish line in 1:44.48 hours.

“I’m happy that I won again but I just wish I’d run it faster. There are so many slopes,” said Wipawee, who works at the Santi Suksa School in Chiang Mai. She normally runs the half-marathon in one hour and 32 minutes. “As a runner, you have to be well disciplined. So at school I have become more disciplined and more responsible for my work,” added Wipawee.

In the men’s event, Nittaya Temsang left the field in his wake, winning in 1:23.38 hours, almost seven minutes ahead of runner-up Amata Kanpai and third-placed Sukrit Kaewyoun. Organisers also gave 50 pairs of trainers to local school students as part of the Shoes for Kids campaign which raises donations through www.teelakow.com to provide trainers for needy children.

The event was the second of the seven-race Bangkok Airway series.

The next stop is the Samui Half Marathon due on June 10 in Surat Thani province.

Tags:
Race favourite Wipawee Pratumsuwan racked up yet another title clocking 1:36.34 hours to win the women’s 21k at the Bangkok Airways Krabi Half Maratho