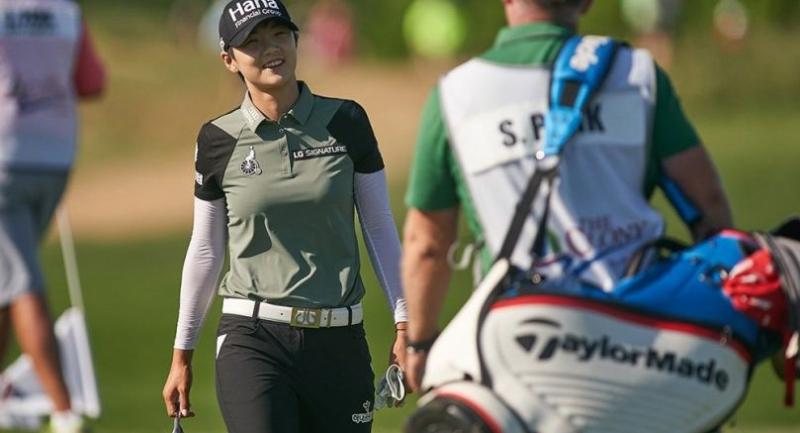 Sung Hyun Park of South Korea plays smiles after chipping in for birdie at the 18th hole during the continuation of the second round of the 2018 Volunteers of America LPGA Texas Classic.

By Nation and Agencies

Park fired a five-under par 66 to finish the 36-hole event at 11-under 131 at Old American Golf Club near Dallas for a one-stroke victory over American Duncan with Chinese rookie Liu Yu another shot adrift in third on 133.

Park's pitching wedge chip-in at the 18th hole provided her margin of victory over Duncan, who closed with three birdies in a row after Park was in the clubhouse, and Liu, who like Duncan had a career-best LPGA finish.

"I knew it was a pretty important shot," Park said through a translator. "That shot was a difficult situation for me but I'm glad I made it."

It was the third LPGA title for Park, who captured her first major crown last July in the Open at Trump National and added the Canadian Women's Open six weeks later. Ariya shot a 67 on Sunday to land inside the top 10 for the seventh time this season. Sister Moriya, with three under-par-139, was at tied 23rd.

Storms that wiped out almost all play Thursday and Friday forced organizers to trim the event to 36 holes, with the final round starting Saturday afternoon.

Ashok, seeking her first LPGA title, birdied the par-5 15th on a five-foot putt and closed with three pars. The 20-year-old Olympian from Bangalore, three times a winner on the Ladies European Tour, completed a 66 to grab the early clubhouse lead.

"I'm happy," Ashok said. "I came back one better than I left so that's good."

But 18-hole co-leader Park had yet to start her final round after opening on 65 and made her charge in the afternoon.

Park opened with a bogey but eagled the par-5 fifth and followed with birdies at the sixth, eighth and ninth before a bogey-birdie start to the back nine left her ahead by three with seven holes remaining.

After six pars, Park was off the green with her approach at 18 but punched a bouncing pitching wedge shot up the green and into the hole for a closing birdie that all-but sealed the title.

Duncan, finishing on the front nine, fired a 64 that included a costly lip-out tap-in for par to bogey the sixth. She closed with three consecutive birdies but was one shot shy of Park, settling for a career-best runner-up finish.

"It sure did feel like a back-nine Sunday atmosphere," Duncan said. "It was a great day. A crazy week but it was a great tournament."

Liu eagled the eighth, her penultimate hole, but like Duncan couldn't make an unlikely hole-out from the fairway to match Park.

"This was a great confidence booster for myself to know I can contend out here," Liu said. "I was mentally strong, focused on one shot at a time, and it really worked out."