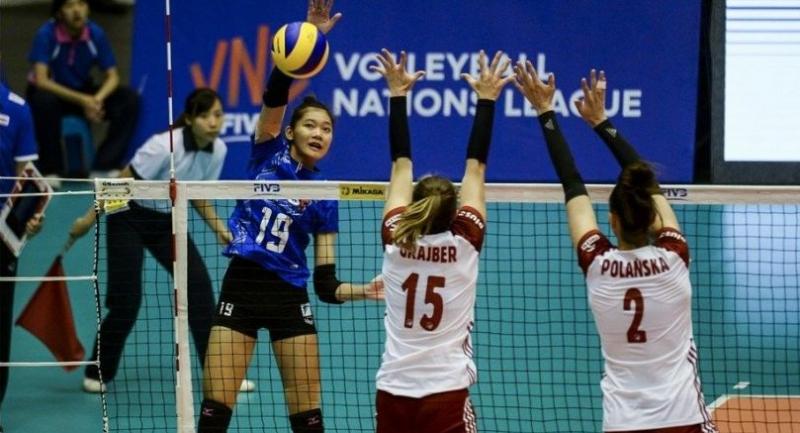 It seemed at times the Thais just couldn't find the points - or the luck - to roll Poland over but with wing spiker Chatchu-On's confidence growing, and with support from Ajcharaporn Kongyot (16 points), they seized control of the tie-breaker and just wouldn't let go.

When a Chatchu-On kill sealed the deal, the Thais' leapt into each others' arms and danced without a care in the world.

The loss would have hurt for Poland's superstar Malwina Smarzek, who again led all concerned on court with 38 points. The spiker has been in sensational form in Macao, and a fourth set-winner that threatened to bounce out of the stadium was just one of any number of personal highlights in an effort that included four blocks.

But the young Thai squad's efforts in Macao this week have won over the crowd and coach Danai Sriwacharamaytakul had them looking at all times to stretch the Polish blockers - and avoid Smarzek. That meant the ball was flying everywhere.

The Poles were worried by that movement in the first set and by the fourth had seemingly no real idea how to cope other then look to Smarzek - and hope.

The Thais meanwhile kept moving and when Sriwacharamaytakul took a time out at 11-9 in the last set he called for calm, and his players stuttered but eventually they delivered.

The loss marked Poland's first 0-2 run in world level major tournament matches since they lost five in a row at the 2014 FIVB Volleyball World Grand Prix. They'll be now hoping to stop the rot. Quickly.

But Thursday night was all about this young Thai squad, whose only two previous victories over Poland had come at the 2008 and 2009 World Grand Prix - both times over five sets. It was also the first time in history they had ever taken a first set of the Poles.

The Thais moved to 2-4 after two rounds with their second victory in the VNL overall while Poland are on the same mark. Thais are at 12th in the standing.