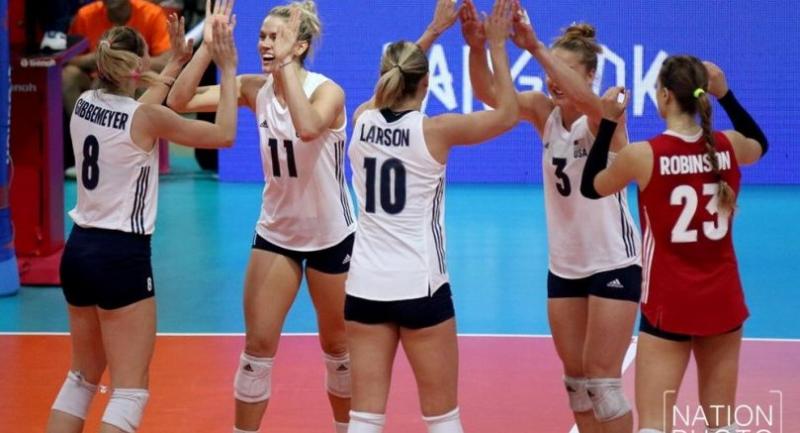 US players reacts during a match against Thailand. / Nation Photo by Wanchai Kraisornkhajit

Hosts Thailand completed Pool 12 action of the FIVB Nations League without a win, losing to a red-hot United States 3-0 in front of 7,000 fans at Hua Mark Indoor Stadium on Thursday.

With their rapid game, lightning smashes and stronger teamwork, USA barely gave the home side room to breathe in the first two sets. Thailand fought valiantly to go ahead briefly in the third set at 9-8 and 11-10 but the League leaders hit right back with a ruthless attacking game to dominate the rest of the match.

USA have won eight out of nine matches to top the table. Each of their last seven matches were won in straight sets. USA Head Coach Karch Kiraly said: “ Our team is doing a good job of following our game plan. We make a new plan for every opponent and they’re doing a nice job of executing it and that started tonight with very good serving. We caused lot of trouble for Thailand in that first set making our job easier because they have an offense that’s very complicated. We have a very difficult week ahead but we look forward to the challenge.”

Thailand Head Coach Danai Sriwacharamaytakul said: "It was a very tough match for us today,but it was such a great honour for my team to have a chance to play against a strong team like USA.They played  a high level volleyball and they have a very good playing system.We will take this match as a good learning experience and I hope my young players will gain good experience playing against highly experienced USA team."

Thailand will host Pool 15 which also include Japan, South Korea and Japan next week in Nakhon Ratchasima from June 5-7.