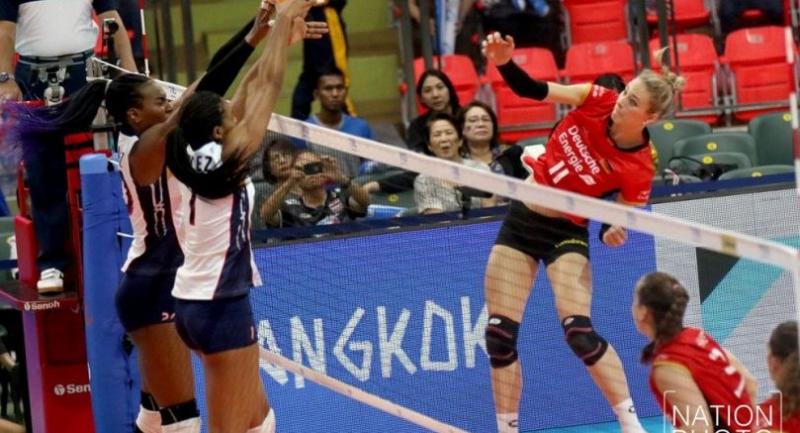 World No 13 Germany underlined their supremacy over Dominican Republic with a 3-1 win in their FIVB of the Nations League Pool 12 last game at Bangkok’s Hua Mark Indoor Stadium on Thursday.

The European side have beaten the South American rivals five out of their latest six meets including the 25-22 25-15 21-25 25-12 win on Thursday. This was German back-to-back wins after they outlast Thailand in five set thrillers on Wednesday’s evening.

Germany coach Felix Koslowski said the hard-fought win over the Kingdom’s team gave his squad a good boost into the match against the Queens of the Caribbean.

“Wednesday’s win over Thailand counted even more for us . We had a taste at winning and we wanted to stay hungry for more win,” said Koslowski. “Dominican Republic is a great team. They have shown in this Nations League that they have great potentials and have been improving all the time.

“My  players showed emotions on the court . They played really well especially on the serves and reception. They controlled the situation well and served really aggressively and precisely. Beating Dominicans is never easy. I’m really proud of my players,” added the German coach

“Today we made so many mistakes. In this kind of game you are not allowed to make mistakes. We could not follow the game plan and that was the reason of our loss today,” the Dominican coach said.

Germany have won three out of nine matches while Dominicans won two out of nine.