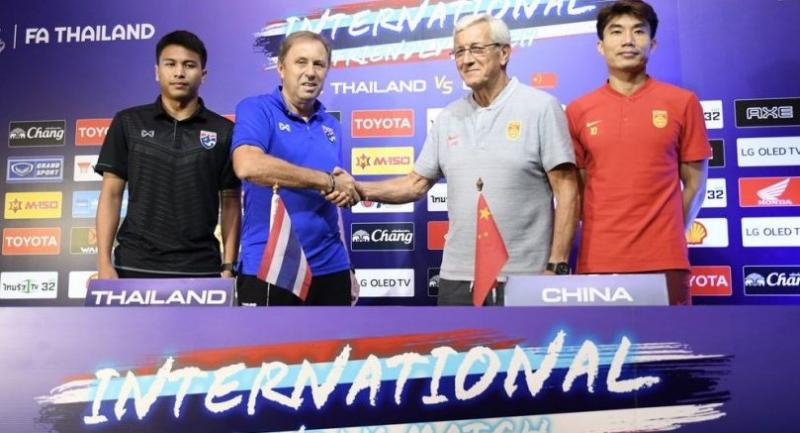 Thailand are aiming to repeat a previous stunning win over China as the two nations square off at 6.30pm on Saturday in a friendly international at the Rajamangala National Stadium.

Five years ago Thailand dished out a 5-1 victory in an exhibition game in Anhui province.

This time, with Milovan Rajevac in charge for Thailand and the widely-revered Italian Marcello Lippi in the opposite dug-out China, it will be a daunting task for the hosts to overcome.

“This is a great challenge for us. Marcello led Italy to the World Cup [in 2006]. He is one of the best coaches in the world,” said the Serbian Rajevac, whose career highlight includes leading Ghana to the World Cup quarter-finals in 2010.

Rajevac used to work in China as assitant coach for Beijing Guoan between 2000-2003 and noticed a huge improvement in Chinese football.

"China is moving in right direction. They have invested a lot of money. In the next World Cup Qualifiers China will be one of the serious challengers," Rajevac said.

Asked if Thailand focused too much on defence and were not very successful in attack, Rajevac said: “In modern football you have to play an attacking game but also have a good defence to achieve good results. Even the Italian team with Lippi as coach played defensively but were able to score goals, too.” China will be represented by several young players who impressed Lippi during a 1-0 win over Myanmar in a friendly last week.

“This is a chance to see how much they have improved and how ready they are for the Asian Cup,” the Italian coach said.

The game will mark the 100th cap for China’s 37-year-old captain Zheng Zhi. “Zheng is a very disciplined player, which is why he is the most successful player in China,” said Lippi. “He is the most important player in the team and the young players look to him as a role model.”

The Guangzhou Evergrande’s midfielder has represented China since 2002 and has scored 15 goals.

“To play professional football for China for the 100th time is a great honour for me. I’m looking forward to a good result for my team,” he said.

Thai midfielder Thitipan Puangchan of Bangkok Glass said: "We have several new players who have shown potentails to be at this pointt. We used ot beat China but it was a long time ago. I expect an entertaining match."

The match will be shown live on Thai Rath TV 32.