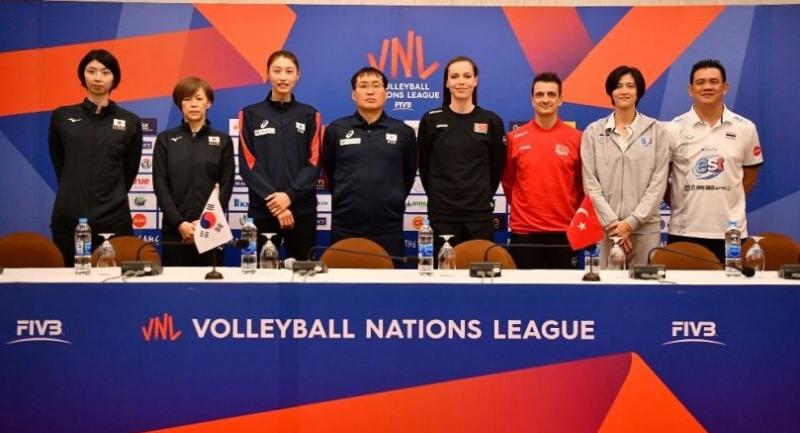 Coaches and players of Japan, South Korea, Turkey and Thailand.

Nakhon Ratchasima - Turkey are  expecting a tough week ahead of them as they face top Asian teams Korea, Japan, and Thailand in the fourth round of the inaugural Volleyball Nations League due between June 5-7 in Nakhon Ratchasima.

Turkey, with six wins from nine matches, are currently at sixth in the 16-team standings. They will face Japan in the opening match at 3pm on Tuesday.

Turkey Team Captain Eda Erdem Dundar said: “ The fourth round will be very difficult especially going up against top Asian teams. Those three games will be really hard but we will try to do our best. I wish everyone a good luck.”

Turkey Head Coach Giovanni Guedetti said: “We are excited to be here in Thailand,and  it’s always very nice to play volleyball here. We are going to face a very hard group - three of the best Asian teams - so it’s a big challenge for our very young team. We will see how we can adapt to this competitive kind of volleyball.”

Japan Head Coach Kumi Nakada said: "We are in the fourth round of the Volleyball Nations League and every week, we’ve been playing very tough matches. This week  is going to be another difficult week. However, we want to prepare technically, try to get good results, and grow as a team in each match."

Thailand will try to salvage their pride after lsoing three games last week at the Hua Mark Indoor Stadium. The Kingdom will take on South Korea at 5.30pm.

Thailand Team Captain Pleumjit Thinkaow said: “I am very glad to play at home again especially here in Korat ,Nakhon Ratchasima where we have a lot of volleyball fans to cheer for us.But it is going to be a very tough week for us once again because we will be playing against the three teams with good results in the past three weeks. We will try to keep improving in each match and will play our best infront of our fans.”

Thailand Head Coach Danai Sriwacharamaytakul said: "It is such a great opportunity for our team to play against top teams from Asia like Japan and Korea and one of the best teams from Europe Turkey who last week did a very good job. It will very a very challenging job for us to play against these three teams.They have a very good playing system and good players. I hope my team will gain good experience from them and we will try our best in this week.”

Korea Head Coach Cha Haewon said: " Every match will not be easy. We will try prepare mentally and physically  and hope that my team will show their best here.”