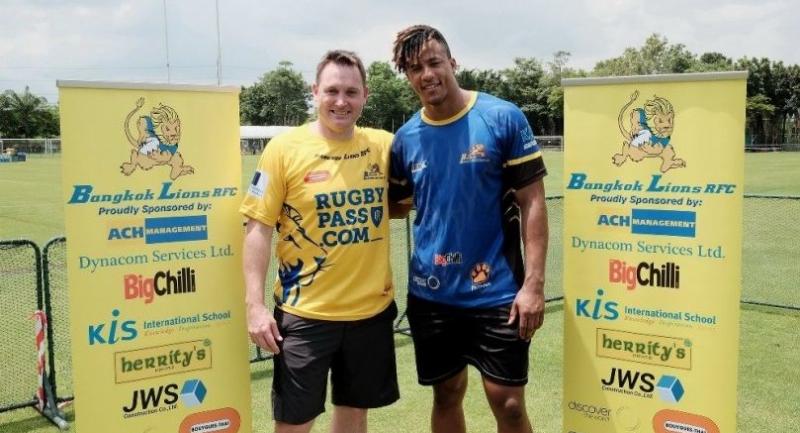 Andrew Mehrtens, a former All Black star, and Anthony Watson a current England player, were in Bangkok recently to promote rugby in Thailand and support the efforts of the Bangkok Lions Rugby Club in elevating the sport in Thailand.

The pair attended a club training day at Bangkok Patana School before attending a charity dinner at the JW Marriott Hotel the same evening.

Their career successes inspired a new generation of Thai rugby talent honing their skills with the Bangkok Lions Rugby Club. Mehrtens has 70 caps, 967 points and played first class rugby for 12 years in New Zealand, England and France. He is recognized as one of the all-time greatest players and the 7th highest point scorer in international rugby. Watson, an England and British and Irish Lion is just 24 years old and already has 36 international test caps and is a global ambassador for Adidas and Maserati. Rugby is the fastest growing team sport on the planet, fueled by Rugby 7's, women's rugby and participation at the Olympic Games. Thailand will be participating in Rugby 7’s at the 2018 Asian Games. The Rugby World Cup in 2019 is to be hosted in Japan - the first time the event will be staged in Asia. Rugby has been played in Thailand since the 1920's and has more than 150 clubs and 20,000 players in the Kingdom.

“Thailand has a proud record in world rugby, and within Asia, both men and women have a reputation for being tough and competitive opponents,” said Andrew Mehrtens. “The Thailand Women's team won gold at the 2017 SEA Games and the Men the bronze. At this year’s Asian Games, both teams must be medal contenders,” he added.

“Being in Bangkok and meeting both fans and fellow rugby players was exciting. The core values of rugby are identified as integrity, passion, solidarity, discipline, respect and inclusivity, and I think it’s something that really resonates in Thailand. The sport does not discriminate,” said Anthony Watson. “It is these fundamental values that make the sport of rugby unique and what has really seen it grow in Thailand over the past few years,” he added.

Both Watson and Mehrtens acknowledged the significance and contribution of rugby clubs at the grass root level. “The Bangkok Lions Rugby Club provides an outstanding opportunity for the youth in Thailand to learn the game of rugby. Not only do the players learn about the sport and how to keep fit and healthy, but also essential core values and life skills,” said Watson.