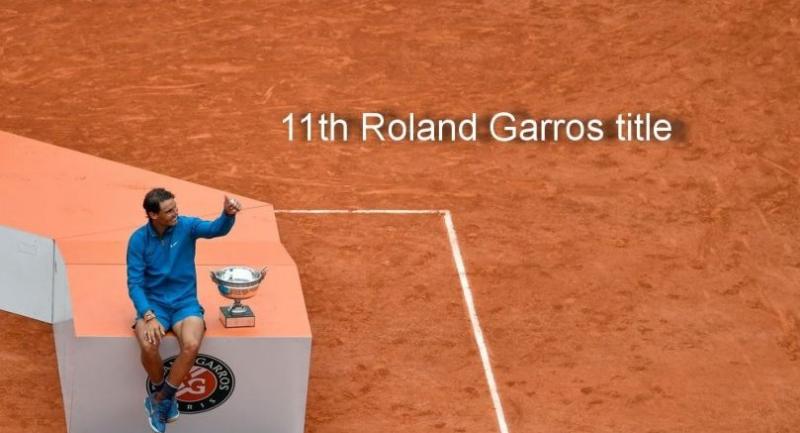 If Benjamin Franklin were alive today, he'd have to amend his belief that death and taxes are life's only certainties and add a third -- Rafael Nadal winning the French Open.

The Spaniard secured an 11th title at Roland Garros on Sunday and 17th major of his career.

Juan Martin del Potro, who was run ragged by the world number one on Court Philippe Chatrier in this year's semi-finals, was right to state that it's almost impossible to beat Nadal on clay.

However, you will never hear Nadal echo similar brash confidence despite his straight-sets win over Dominic Thiem in the final.

Just as happy fishing or playing golf in Mallorca, Nadal is ruthless on the tennis court but disarmingly humble off it. "I have doubts every day but that's good as it makes me work hard with more intensity," said Nadal last year when he captured his 10th French Open, a year after his latest battle with a wrist injury forced him to withdraw from the tournament after two rounds.

That shock exit prompted speculation that Nadal was finished as a heavyweight of the sport.

"You have to be humble and accept that you have to work to improve things," added Nadal.

"Life is never clear. If you have no doubts, then you are very arrogant. I am not an arrogant person."

It is that forthright modesty which endears Nadal to his legion of fans as is his respect for opponents, never forgetting to applaud every vanquished foe off court. His idiosyncracies are just as charming to his supporters.

His picking at the rear of his shorts and mopping of his brow, aligned with his obsessive devotion to lining up his water bottles, are parts of the Nadal DNA.

Victory on Sunday moved Nadal to just three Slams behind his great rival Roger Federer who, at 36, is more than four years older.

It also reignited the debate over who is actually the greatest player of all time even though the two men have shared the last six majors between them.

Nadal's Grand Slam CV boasts 11 French Opens, three US Open titles, two at Wimbledon and one at the Australian Open.

He has now also joined Federer and Novak Djokovic in passing the $100 million prize money barrier.

Tennis has been good for Nadal but he has been just as influential as a key driver of the sport's growth.

He won an under-12 regional crown at age eight and by 12 had captured Spanish and European age-group junior titles.

By 15, he had turned professional and, two years later, won his first match against Federer. It was early in his career when Nadal began his habit of biting the championship trophies he wins.

Nadal added Wimbledon crowns in 2008 and 2010, an Australian Open title in 2009 and completed the career Grand Slam in 2010 by defeating Djokovic in the US Open final, becoming the youngest in the Open era (since 1967) to complete the four-event career sweep.

And only Nadal and Andre Agassi can say they have a career Grand Slam and an Olympic men's singles gold medal, Nadal having claimed his in 2008 at Beijing.

Nadal added another US Open crown at Arthur Ashe Stadium in New York in 2013 and a third last year.

Knee injuries have taken a toll throughout his career, costing him nine Slam appearances, and after he failed to even reach a Slam semi-final in 2015 and 2016 some figured his greatest moments were behind him.

But Nadal roared into the 2017 Australian Open final, losing to Federer, then captured his record 10th French Open crown in June last year, setting the stage for another title run in the Flushing Meadows fortnight at the US Open in September.

Only Nadal, Pete Sampras and Ken Rosewall have managed the feat of winning Grand Slam titles in their teens, 20s and 30s.

Factfile on Rafael Nadal after the Spaniard's 11th French Open title on Sunday: