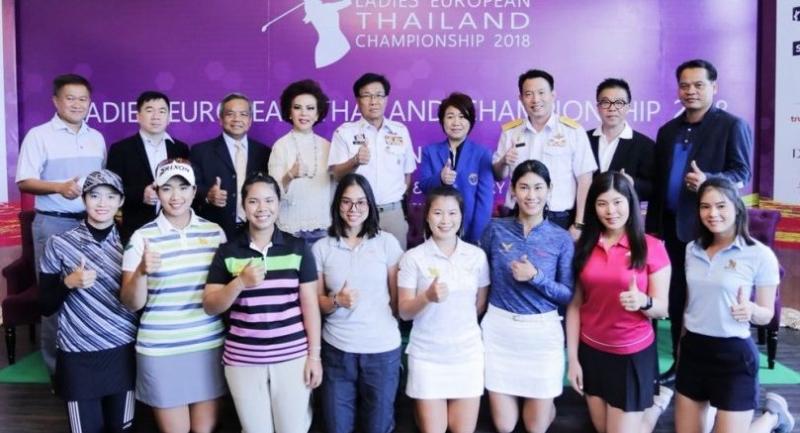 The second edition of the US$300,000 Ladies European Thailand Championship will be held from June 21-24 June at Phoenix Gold Golf & Country Club, Pattaya without defending champion Atthaya Thitikul.

The inaugural tournament created global headlines last year when the Thai prodigy became the youngest ever winner on the tour at the age of 14 years, four months and 19 days, in July 2017.

Atthaya, who has since won two more titles – the Women’s Amateur Asia-Pacific Golf Championship in Singapore and the Queen Sirikit Cup in Bangkok last month, says she -is already committed to attending an Asian Games national selection event in Indonesia at the same time.

“It’s a shame that I have to skip the tournament where I gained recognition and reputation for Thailand. I hope I can compete in the tournament next time,” Atthaya told The Nation. Atthaya Thitikul with the 2017 trophy.

18 year-old Saranporn has not missed a single cut since she turned professional in 2014. The Phuket-born player has won 15 professional titles, including two China LPGA events in Jiangsu China and Hong Hong this year.

Red-hot Arpichaya, 16, has won back-to-back Thai LPGA events, in Hua Hin and in Rayong last Friday, which earned her a wildcard into the LET tournament.

LIVE TV Broadcasting will be on True Sport HD 3 on True Visions from 1-4pm on Saturday, June 23 and Sunday, June 24.

Fans can buy Bt100 admission tickets every day of the event at a booth near the public entrance to the golf club.

There will be free admission for spectators aged under 18 and over 60. Gates will open at 8am daily.

The LET Thailand is one of the three big international events due in the Kingdom this month.

Apart from the recently-concluded Thailand Open in Chachoengsao, the Queen’s Cup, the second Asian Tour in Thailand, will take place at the Phoenix right after the LET event.