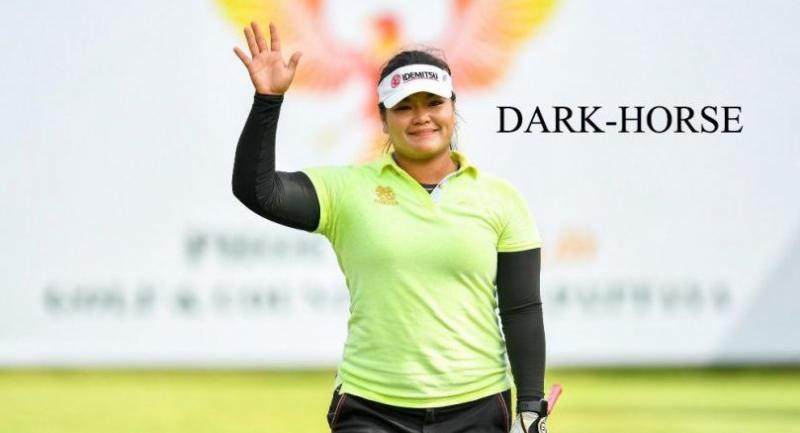 By Nation and Agencies

Unfancied Anuchisa Utama from Lopburi fired an opening 67 to share the lead with Dutchwoman Anne Van Dam after round one of the US$300,000 Ladies European Thailand Championships at the Phoenix Gold Golf and Country Club in Chon Buri yesterday.

The 27-year-old Thai, who has just one Thai LPGA title to her credit, fired six birdies against one bogey at the par-72 course to grab a one-stroke lead over Gabriella Cowley of England and Australian-Thai Whitney Hillier.

Dubbed the “Dutch Bomber”, Van Dam unloaded seven birdies against a double bogey on the 15th hole to take the joint lead. –

Anuchisa credited a hot putter and said: “I was lucky to hole some long putts.” The 22-year-old Dutchwoman made a flying start with four straight birdies from the 11th – her second hole – and although she double bogeyed the par-4 15th, the 2016 Xiamen International Ladies Open champion immediately recovered with a pair of birdies on the 16th and 18th to make the turn in four-under. She then scored another birdie at the par-4 third to set the pace at five-under at Phoenix Gold Golf and Country Club in Pattaya.

“I’m working on some different things in my swing, so I was just focusing on that and not so much the score,” said the longest hitter on tour. “I’ve been hitting my driver a lot better, as I’ve been changing a few things with my coach to hit them a bit higher and a straighter ball flight. I hit some really good ones today.”

Her best came on the 469-yard par-5 seventh, where she hit a drive of 315 yards and she added: “I like the seventh hole. I didn’t birdie it today, but it’s a good risk, reward hole. There are a lot of good holes on this course. I can reach all the par fives if I pitch it on the fairway. From the rough, it’s too tough to get out of and stop it on the green.

“I was really stupid on 15, because I hit the perfect tee shot but had completely the wrong yardage, so I hit it straight into a bush, way too far and had a really unlucky lie. I didn’t hit a bad shot today, just one really good shot where I didn’t think about it that well. It was a bit of a shame, but I’m happy with how I hit back from that double to get right into it.” In contrast to last year, when only six players scored under par and the winning score was five-under-par, there were plenty of birdies on the leader board and the tournament remains wide open.

England’s Gabriella Cowley and Australian Whitney Hillier, whose mother is from Thailand, are both only one shot adrift with Beth Allen from the United States and Maria Palacios from Spain both on three-under.

Cowley said: “I had three birdies on the spin on 11, 12 and 13 and I played really solid the rest of the round. If you hit your driver well, you can give yourself a lot of chances here. The greens are difficult, some stop quickly and some release, so it all about judging it the best you can and giving yourself a decent putt.”

Hillier said: “I played really solid. I hit 12 fairways and actually only 13 greens, but the misses were only just off the green and I left myself in good positions. I made my birdie opportunities where I could. I’m pretty happy today!”

The shot of the day belonged to Scotland’s Michele Thomson, who holed out with a 7-iron from 164 yards on the par-3 14th for her first professional ace.

She said: “It’s my first hole-in-one as a pro, so it was pretty special. I’ve had two as an amateur, both at my home club in a monthly medal at McDonald Golf Club Ellon, where I grew up as a junior.

“Nothing else really happened today, it was one-over and steady. I had a little problem with my back yesterday. I hit a shot on the range and felt a muscle pop, so I had to pull out of the Pro-Am. It was just nice to be able to play today and to be able to swing.”

As the championship moves into day two, it would take a brave person to try and predict the winner after the events of day one on the Eastern Seaboard of Thailand.

LIVE TV Broadcasting will be on True Sport HD 3 on True Visions during 13:00-16:00hrs on Saturday, 23 and Sunday, 24 June. Admission ticket for spectator is available at Ticket Booth near public entrance at the golf club at 100THB/person/day on 21-24 June. Free admission for spectator age under 18 and over 60 years old. Gate opening time is at 08:00hrs daily.

Be a part of world golf history! And let’s see if the new page of world golf record will be set once again in Ladies European Thailand Championship 2018!