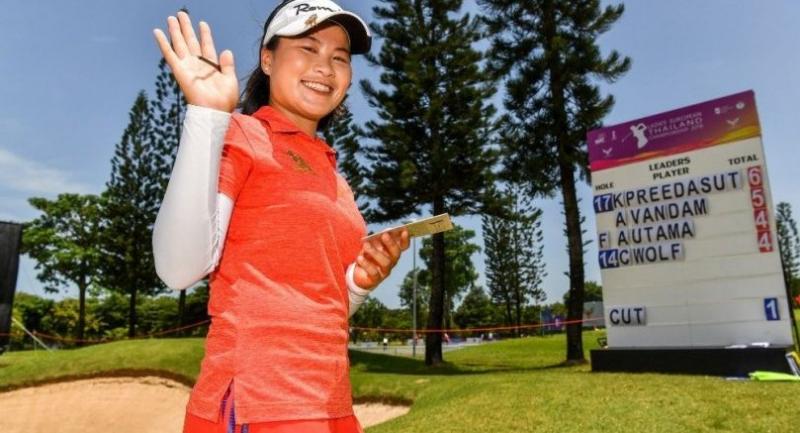 Pressure-free Kanyalak Preedasuttijit shot a second-round 68 to trail co-leaders Lynn Carlsson of Sweden and Filipina Pauline Del Rosario by one stroke at the halfway stage of the US$300,000 Ladies European Thailand Championship at the Phoenix Gold Golf and Country Club in Chon Buri.

Appearing in her second LET event after missing the cut here 12 months ago, the 20-year-old shot five birdies against a lone bogey for a two-day total of six under-par-138, one behind 24-year-old Carlsson, who shot an unblemished 65, and 19-year-old Del Rosario, who hit a 67.

Fifteen months after turning pro, the Chonburi-based Kanyalak has emerged a contender on the LET for the first time and she said having a pressure-free attitude was the key to her impressive form on Friday.

“My father told me to go out there and enjoy the golf. I did that and it turned out I played well,” said Kanyalak, who has two wins to date: a local Thai LPGA Tour event and one on China’s LPGA Tour.

“I didn’t drive the ball well but my short game really helped me out there especially my putts. I need to fix on my tee shots,” added Kanyalak, who will tee off in the final group of an LET event for the first time this morning. “I may get a bit excited but I think I can handle it. I have been playing well over the past six months by finishing in the top 10 in both Thai and China LPGA events. So I’m pretty confident going into the weekend. I want to win for my parents,” added the Thai hope, who shares third place with first-round leader Anne Van Dam of the Netherlands. The latter fired a 71 yesterday.