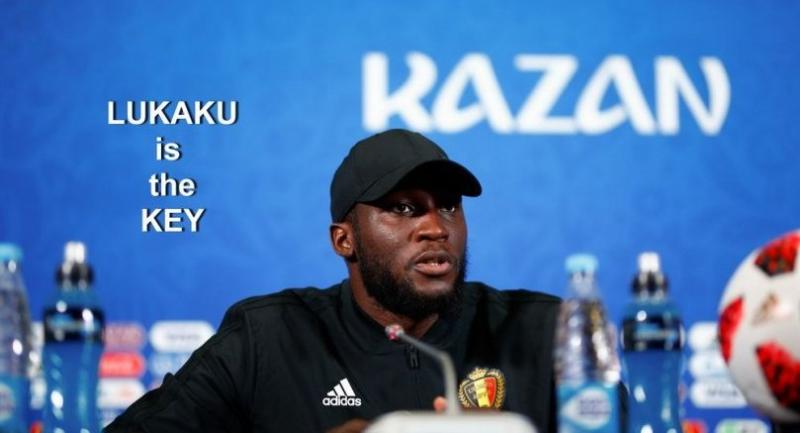 The 25-year-old Manchester United striker has already begun to silence his critics with a four-goal haul in Russia.

But his impressive goalscoring prowess and his aim to be remembered as Belgian's most successful goalscorer faces its sternest test in Kazan against a Selecao defence that has conceded only once in four World Cup games so far.

On the eve of their quarter-final Lukaku brimmed with confidence as he called on Belgium to show they deserve to live up to pre-tournament expectations.

"I've told the lads nothing in life is easy, you have to fight for it," said Lukaku.

"We're up against the favourites, but this will show us where we stand as a team. We're not prepared just to settle for second best."

For the son of Congolese parents who grew up in tough conditions in the city of Antwerp, meeting the five-time world champions in the World Cup quarter-finals has a fairytale ring to it.

Having overcome a number of barriers throughout a promising youth career, including racism and doubts over his playing ability, Lukaku is already doing a fine job of showcasing his talent on the highest stage of all.

Four years after opening his World Cup account with a crucial extra-time winner over the United States in the group stages, Lukaku started Russia 2018 with a bang.

He hit the net twice in Belgium's opening two games, firing braces in a 3-0 win over Panama and another in a 5-2 win over Costa Rica as Roberto Martinez's men underlined their potential.

Although he failed to score in Belgium's final group game, it was Lukaku's inspired contribution during a late counter-attack that allowed Nacer Chadli to score a last-gasp winner against Japan that avoided the humiliation of an early exit to a team ranked 44th in the world.

If Lukaku still believes there are Belgian fans who "want me to fail", as he claimed weeks ago, there were likely to be far fewer after his superb dummy flummoxed Japan's defence and allowed Chadli a simple but invaluable tap-in.

Yet the Belgian, whose determination to succeed was driven by the tough conditions of his childhood, such as having to "eat cereal with water" instead of milk, has yet to convince against higher-ranked teams.

Despite scoring Manchester United's only goal when they were eliminated by Sevilla in the last 16 of the Champions League and finishing with 27 goals last season, Lukaku regularly faces criticism for failing to produce more.

Brazil, and the obstacle of finding a way past a formidable centre-back partnership of Thiago Silva and Joao Miranda, represent another formidable challenge.