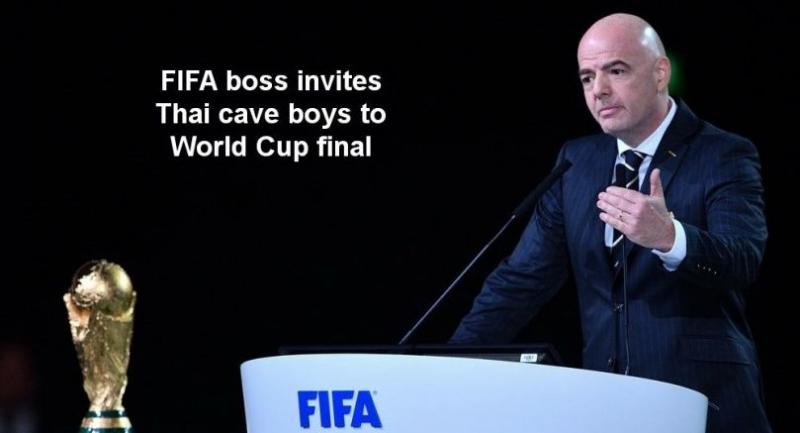 FIFA president Gianni Infantino has invited 13 victims trapped inside the Tham Luang cave to watch the World Cup fina match if they are healthy and finally reunite with their families.

Infantino submitted a statement to the Football Association of Thailand on THursday night Bangkok time to show his concern on the Wild Hog Acadey FC members who have been stuck in the Chiang Rai’s cave since January 27.

“On behalf of the international football community, I would like to join you in expressing my deepest sympathies and support to the families of the players and coach as well as my solidarity with the people of Thailand at this time of great concern,” the FIFA boss wrote in his statement.

“If, as we all hope, they are reunited with their familes in the coming days and their health allows them to travel, FIFA would be delighted to invite them to attend the 2018 World Cup final in Moscow as our guests. I sincerely hope that they will be able to join us at the final, which will undoubtedly be a wonderful moment of coomunion and celebration.” With high level of floods, difficult features of the cape and the condition of the 13 victims, authorities are still unable to evacuate them. By far, a former seal diver passed away while performing duty inside the cave on Thursday night.

The incidence has raised concerns and supports from international sport key figures worldwide. One of the latest messages was from Liverpool FC manager Jurgen Klopp during an exclusive woth CNN.

“Stay strong, we are with you and we are really following all the news and hoping every second that you see the daylight again,” Klopp said in a clip.

“We are all very optimistic that it will happen in the next few, hopefully minutes, hours or the next days. So, stay strong. Best regards from Liverpool, we are with you. You’ll Never Walk Alone.”

Some of the young footballers were seen wearing national jerseys of England, Brazil and a local Muang Thong United when they were found by a British recue team on Tuesday.