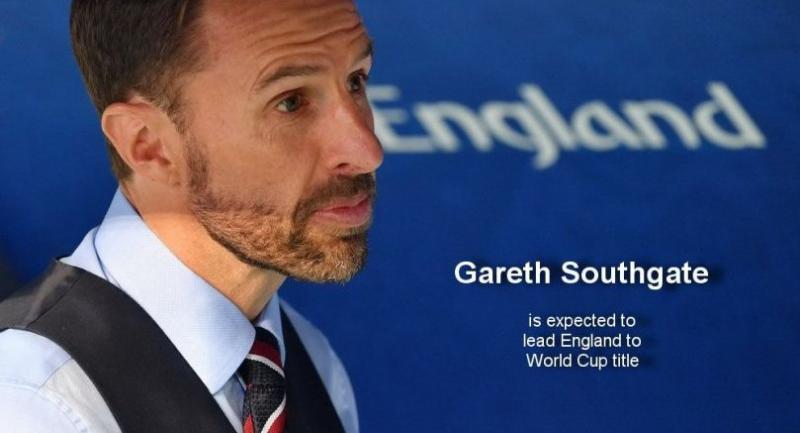 England is basking in unexpected World Cup success as coach Gareth Southgate is elevated to national hero status, cathedral organs belt out football anthems and the country prepares to shut down for Wednesday's semi-final.

Clean-cut, waistcoated manager Southgate was not even supposed to be in Russia. Now he's about to lead England against Croatia with a place in Sunday's final beckoning.

When the 47-year-old was appointed in November 2016 after Sam Allardyce left his post following a newspaper sting after just 67 days in charge, there was little fanfare.

England, basking in a long summer heatwave, is starting to believe the team can reach their first final since 1966 after the young side saw off Sweden 2-0 in the quarter-finals on Saturday.

Almost 20 million people in Britain tuned in, not accounting for the many more who watched in pubs and public viewing areas.

Streets were deserted as people crammed into sweaty pubs, gathered around big screens or stayed home to watch the national side reach the last four of a World Cup for the first time in 28 years.

Marks and Spencer, official tailors to the England team, declared Saturday #NationalWaistcoatDay in honour of Southgate and the team.

The manager has even been promised a lifetime supply of waistcoats from a firm in London.

"I'm so impressed with Southgate’s performance, and with his choice of attire," the founder Sir Plus, Henry Hales, told the London Evening Standard.

Exeter Cathedral, in southwest England, tweeted a video of an organist playing the unofficial team anthem "Three Lions (Football's Coming Home)" in an tweet entitled "To Russia With Love".

The song itself, released by the Lightning Seeds and comedians Frank Skinner and David Baddiel for Euro '96, hosted in England, is storming up the charts again.

"Looking back on when we first met, I cannot escape it, I cannot forget," the fans chant.

"Southgate you're the one. You still turn me on and football's coming home again."

Southgate was an accomplished defender for England and a clutch of Premier League clubs, but his managerial experience is limited to a spell at Middlesbrough and with the England Under-21s

He famously appeared in a pizza advertisement that played on his penalty miss in the Euro 96 semi-final shootout against eventual champions Germany.

But he has gone from fall guy to hero, taking social media by storm, with the hashtag #GarethSouthgateWould used thousands of times by people imagining how he would help them out.

"#GarethSouthgateWould siphon the petrol out of his own car and put it into yours, if he saw you parked up on the hard shoulder on a motorway out of fuel. He'd wave you off, then he'd wait for the AA (Automobile Association) to come get him, because that was his last few drops," tweeted @DrawtyDevil.

AmnestyUK tweeted: "#GarethSouthgateWould ensure we retain all our hard-won #humanrights after #Brexit."

Former British Paralympian Tanni Grey-Thompson tweeted: "#GarethSouthgateWould come all the way to London to make sure there was a ramp to get me off the train when he was only popping to Boro to get some milk."

"Our Gareth, who art in Samara, Hallowed be thy waistcoat.... For Thine is the semis, The Final and the Glory, For ever and ever. #It's Coming Home."

Southgate's rising profile has been a bonanza for lookalike airline pilot Neil Rowe, who even managed to temporarily fool BBC TV presenter and former England international Gary Lineker when he spied him in the crowd during the match against Sweden.

"I signed kids' napkins in McDonald's in 96 after he missed the penalty, have been shouted at by Colombian fans and got free beers in the Irish bar," Rowe told the BBC.

Perhaps, though, the Daily Mirror summed it up best as to why Southgate has wowed the English public.

"He is a gentleman."