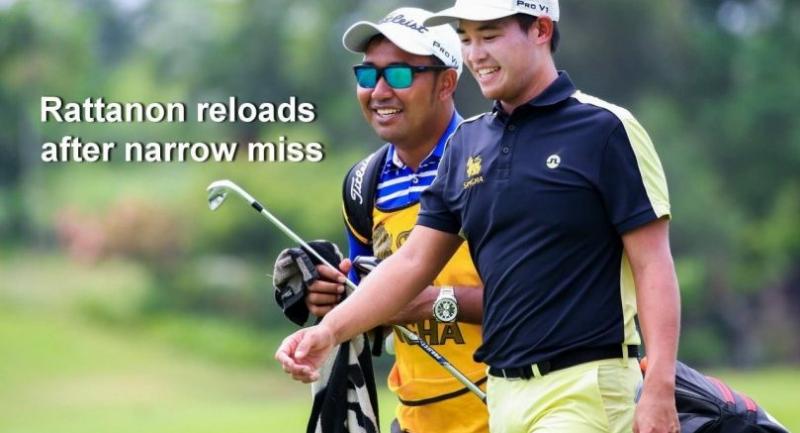 Rattanon Wannasrichan and his caddy.

CHON BURI - LOCAL YOUNG gun Rattanon Wannasrichan aims to carry momentum from the Singha All Thailand Championship into next week’s Japan Tour after finishing second in the Bt3-million All Thailand Tour event yesterday.

The 23-year-old fired a final round 70 to finish on nine-under-par 271, four shots behind the winner Thanyakorn Korngpha who despite shooting a final 72 walked away with the trophy with a total 13-under-par 267 at the Laem Chabang International Country Club.

“I came into this tournament trying to build up my confidence before I enter the Japan ISPS Handa Match Play in Saitawa next week. I’ve done pretty well by finishing second,” said Rattanon, who trailed the leader by six strokes going into the final round.

After the 28-year-old Thanyakorn committed a double bogey on the second hole followed by back-to-back bogeys on the third and fourth, Rattanon cut the deficit to only two shots. As 2016 winner Thanyakorn stumbled to his next bogey on the 11th, the younger Rattannon parred the hole and was breathing down his neck just a shot behind.

However Rattanon’s challenge faded quickly, sinking three bogeys to leave Thanyakorn firmly in the driver’s seat by the end.

“Playing five weeks in a row finally took a toll on me. I felt so tired from then on. But finishing second isn’t so bad,” said Rattanon, who took home Bt277,500 as his runners-up prize.

With the All Thailand Tour counting for World Golf Ranking points from 2019, Rattanond sees it as a good opportunity for Thais to climb up the world ladder while playing at home.

“We will be more motivated to produce good results. And when we play overseas, there will be less pressure about trying to get world ranking points,” he said. Thanyakorn completed his wire-to-wire victory after overcoming a sluggish final round play to claim his second All Thailand Tour trophy.

“Although there were some downs, I managed to achieve my goal by winning the title here,” said Thanyakorn who took home Bt450,000 in prize money.