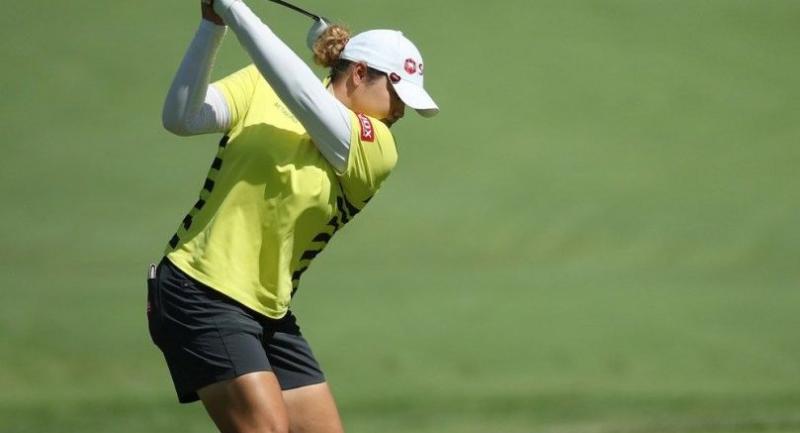 Thailand's Ariya Jutanugarn and South Korea's Amy Yang go into the final round of the Scottish Open with a one-stroke lead after overnight leader Tiffany Joh shot a nightmare nine- over-par 80 on Saturday.

Joh, who has never won on the LPGA Tour, had the misfortune along with the others who were close to the top after two rounds to go out in increasingly bad weather with gusts of wind as strong as 35 miles per hour.

It looked promising initially for 31-year-old Joh as she extended her overnight lead from three shots to four with a birdie on the second but from there on the American endured a traumatic stretch of dropping seven shots in six holes.

None of the top five were able to break par, Yang and US Open champion Ariya shooting two-over rounds of 73. They are eight-under for the tournament and hold a one-shot advantage over Australian Minjee Lee, who posted an even par 71.

Yang at least kept her game together unlike her playing partner, the unfortunate Joh, whilst Ariya holed a rare eagle on the 16th to move into the joint lead with the Korean. "When the wind started to blow today I said, 'here is the Scottish Open.' Here is the real one now," said Ariya.

"I really just want to have fun and I have so much fun today. I hit everywhere today," added Ariya, who along with her rivals will face similar conditions on Sunday according to the forecast.

Yang made good on dropping a shot at the 17th with a birdie on the final hole to close out what was a satisfactory round on her 29th birthday.

"I totally forgot it was just my birthday," said Yang.

"I just focused how I'm going to play, but you know, a lot of people wished me a happy birthday today."

Hot on their trail a shot further back are a duo of Yang's compatriots, two-time major winner Ryu So-yeon and Haeji Kang.

The best round of the day belonged to Australian Sarah Kemp, who went out in the milder conditions in the morning and shot a 67 which places her tied for 10th and five shots off the pace.