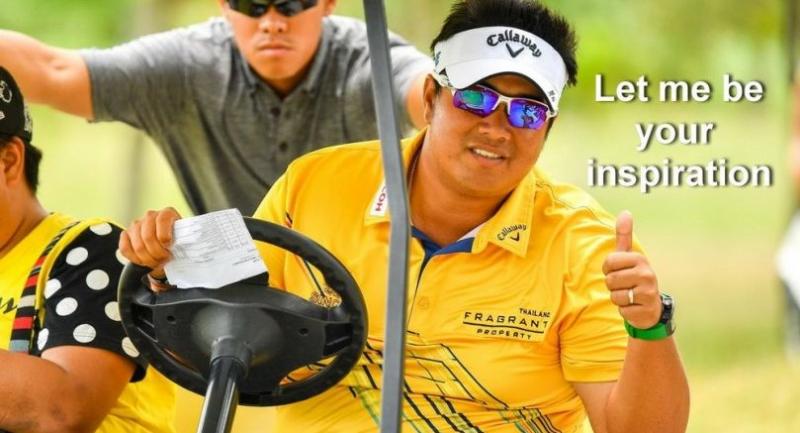 Kiradech Aphibarnrat gives a thumbs-up during his visit to the Royal Cup in Pattaya.

Thailand golf’s flagbearer in the United States, Kiradech Aphibarnrat, says his young countrymen should never stop believing in themselves and practise more on tough courses if they want to join him on the world’s biggest stage.

The Thai No 1, who became the first player from the Kingdom to earn his card for next season’s PGA Tour after finishing 15th at the US Open, hopes young Thais see him as an inspiration as they dream of a career at the top of the sport.

“If I can do it, so can they. Just never give up. I don’t want young players to think that the PGA is out of reach,” said Kiradech during his visit to the Royal Cup in Chon Buri.

The world No 31 said he grew up watching former Thai No 1 Thongchai Jaidee having great successes around the world and even play in some PGA events (as a non-member), which inspired him to follow in his footsteps.

Now he hopes to be the same role model for future generations.

“I got to see some players in the Royal Cup and there are lot of talented Thai players under 20 who can pursue a career on the world stage,” said Kiradech. “I want young players to start believing. With perseverance, hard practice, determination and a clear target, they might even succeed earlier than me.”

29-year-old also suggested that local tournaments set up difficult courses so that young players can sharpen their skills before they enter the more challenging conditions in the Majors and big international events.

“From my experience, young players complain they can’t tackle difficult circumstances because they have become used to easy conditions. So they feel discouraged and tired,” Kiradech explained.

“But if they practise on narrow fairways and firm greens with long roughs, they can adapt to tough challenges. I never want to see the winners shooting under 15 or 20 under-par in Thailand. Local courses should be set up tougher.”

This year Kiradech was the only Thai to make the cut at the Open, while young guns like Danthai Boonma and Jazz Janewattananond were gone by the weekend. Teen sensation Phachara Khongwatmai also failed to make the Open cut in his two attempts, in 2016 and 2017.

“Our young players are as good as Americans, they just don’t get used to difficult courses,” Kiradech added.

Thailand’s top player will next enter the World Golf Championships in Ohio next week before the year’s final major, the PGA Championship.

His aim for his first season on the PGA Tour next year is to win his first title and play in some big European Tour events if he earns a full membership card again the following year.

“I want the world to see a Thai flag flying on the PGA ,” he said.