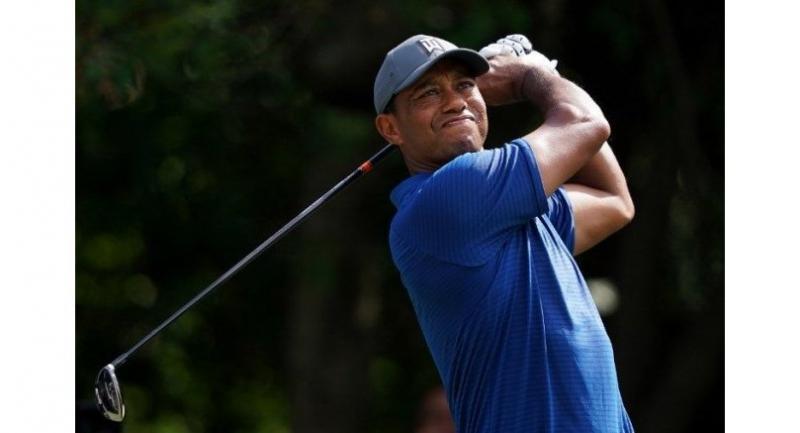 Tiger Woods of the United States plays a shot during a practice round prior to the 2018 PGA Championship at Bellerive Country Club.

Ten years after his last major victory and five years since his last triumph, Tiger Woods is back on the prowl and a new generation of rivals couldn't be more thrilled.

When 98 of the world's 100 top players tee off Thursday in the 100th PGA Championship at Bellerive Country Club, there will be more than a few who hope to live out a boyhood dream and battle the 14-time major champion for glory on Sunday.

"He's still Tiger," said Britain's 27-year-old Tommy Fleetwood. "For guys from my generation that would have grown up with Tiger in his prime, how many people get the chance to be in contention or play against Tiger Woods on a final day of a major when he was the guy you watched. He was the hero."

Woods is only eight months into his comeback from spinal fusion surgery after missing most of the past two seasons with severe back pain that had him wondering if he might ever play again.

"Just for me to be able to have this opportunity again is a dream come true," Woods said. "I didn't know if I could do this again, and lo and behold, here I am.

"So just coming back and being able to play at this level and compete, I've had my share of chances to win this year as well, hopefully I'll get it done this week."

"It's something very special for quite a large number of players at the moment that he's had his comeback and he's playing well and we have that chance really, we could eventually be playing with Tiger on a Sunday coming down the stretch," Fleetwood said.

New British Open champion Francesco Molinari of Italy, who played alongside Woods in the final round at Carnoustie, remains impressed with the former world number one and his impact on so many careers.

"He has changed the game for our generation," Molinari said. "Being a teenager growing up playing golf, in my generation we were all looking up to him, especially around 2000, 2001, 2002. He was doing unbelievable things.

"He has been a model and an idol for me growing up and it's nice to see him back playing good golf. Hopefully we'll be paired together late on Sunday again this week."

Doubters say Woods gets tired late in his rounds and point to scoring averages a full stroke higher on his back nines than his starting sides.

"I wish I could figure that out. I don't know what it is. I don't know why I haven't played the back nine as well as I have in the past," Woods said. "If I had an answer to it, I would give it to you, but I really don't know."

To Rory McIlroy, a four-time major winner who plays alongside Woods and defending champion Justin Thomas in the first two rounds, Woods has already achieved a great deal just being back.

Experience only goes so far, McIlroy said, noting he hasn't won a major since the 2014 PGA.

"Even though he's won 14 of these things, if you haven't done it for awhile, you still have to re-learn a few things, and I think he's going through that stage. But as we saw a few weeks ago, he's right there, which is an unbelievable achievement."

Thomas expects a frenzied atmosphere with throngs of spectators watching Woods and his group.

"It will be cool for him to be back and he obviously has a lot of great success in this tournament," Thomas said. "But once we get out there, like most weeks, it will be business."

US star Jordan Spieth would complete a Career Grand Slam with a victory. he expects a short-game shootout.

"You'll see some hole outs by the look of this golf course," he said. "There's nothing wrong with that at all. It's still a fantastic test of golf."