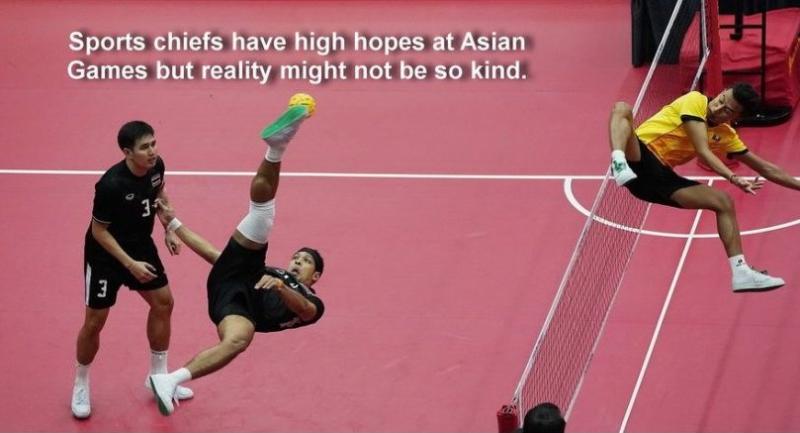 Sports chiefs have high hopes at Asian Games but reality might not be so kind.

A Herculean task awaits Thailand over the next fortnight if it to accomplish its goal of 17 gold medals at the Asian games in Indonesia.

The Sports Authority of Thailand and the Olympic Committee of Thailand share the same forecast of 17 golds, while 20 appears to be wishful thinking from the Sports Writers and Photographers Association of Thailand.

The standard of Thai sport has dropped in recent years; the latest evidence comes from last year’s SEA Games in Kuala Lumpur, where Thai athletes returned home with just 72 golds, a significant drop from Singapore 2015 (95) and Myanmar 2013 (108).

An estimated Bt137.9 million has been spent to send 830 athletes to Indonesia, where 426 gold medals will be for grabs between August 18 and September 2.

Of the gold medal prospects this year, the sepak takraw team still has the highest potential – Thailand have never failed to win a gold medal in all eight events they participated in, four each in 2010 and 2014.

Thailand have again entered players in four events: the men’s and women’s regu teams, both of which they travel as defending champions, plus the men’s team doubles and women’s quadrant.

Takraw Association of Thailand president Charouck Arirachakaran is brimming with confidence that his team will complete a clean sweep of four golds for the third Asiad running.

While fortunes have declined in several sports, the Thai Amateur Weightlifting Association has never let the country down at major events. More surprise gold medals may come from this sport as the powerhouse China are still serving a one-year ban for doping infringements. The country’s taekwondo queen, Panipak Wongpattanakit, is another strong contender for gold, in the women’s 49 category. The 21-year-old, the 2016 Olympic bronze medallist, has been in incredible form, winning eight titles last year – three at Grand Prix level – and won the Jordan Open just last month.

Golf should also yield a golden return for Thailand due to the emergence of outstanding young talent, none more so than teen prodigy Atthaya Thitikul.

The girl who set a world record as the youngest winner of a Ladies European Tour title aged just 14 last year is now, at the ripe old age of 15, widely favoured to lead the women’s team in a successful defence of its gold from 2014.

Boxing, sailing and the martial arts are other areas in which Thailand should celebrate Asiad champions.

Charouck, who doubles as secretary-general of the Olympic Committee of Thailand, reckons that in order to reach the group’s lofty gold-medal target, it will be necessary for Thailand to excell in the martial arts. More than 80 gold medals are on offer in that area alone, in jujitsu, karatedo, kurash, judo, pencat silat and wushu. Thai women's badminton team before their depature for Indonesia.

Even badminton, in which Thailand can claim to be fielding a former world No 1, offers slim hopes of a medal haul. Ratchanok Intanon, now world No 4, is an outsider in the women’s singles, as are the mixed doubles pairing of Dechapol Puavaranukroh and Sapsiree Taerattanachai, and Rawinda Prachongjai and Jongkolphan Kititharakul in the women’s doubles. Japan and China are expected to dominate.

On the downside three sports – tennis, bowling and cycling – which contributed four golds from 2014 are unlikely to repeat the same feat.

Thai tennis is in a slump, while the cyclists and bowlers have been struggling due to the high level of competition in the region.

Tags:
A Herculean task awaits Thailand over the next fortnight if it to accomplish its goal of 17 gold medals at the Asian games in Indonesia. Time to