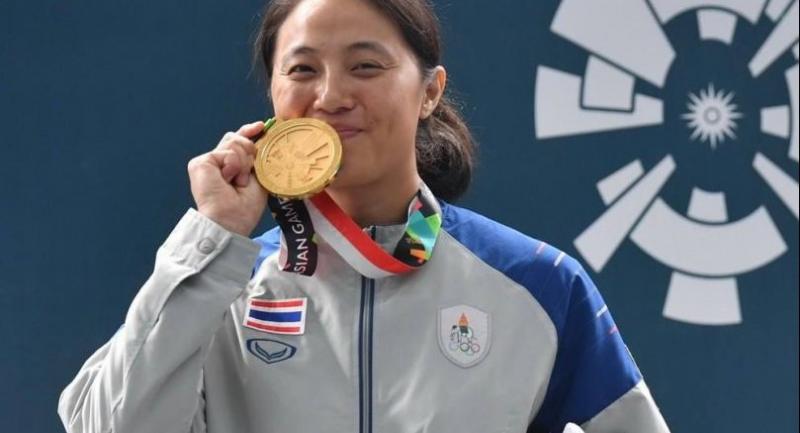 SUTIYA JIEWCHALOEMMIT finally made an Asian Games breakthrough, claiming her first women’s skeet gold medal on a day of mixed fortunes for Thai athletes in Indonesia on Sunday.

After settling for bronze in 2010 and 2014, it was third-time lucky for the 32-year-old sharpshooter who beat Wei Meng of China 55-54 in the final. Her mark of 55 also equalled Asian record set by Wei in the Asian Championships in Astana last year. Defending champion Kim Minji of South Korea won the bronze with 42 points.

Sutiya’s gold medal came to Thailand’s rescue on a day when badminton star Ratchanok Intanon was knocked out of the tournament and gold medal prospects in golf yielded nothing after the final day. Hers was the ninth gold medal for Thailand in the Games. “I was trying to stay focused. There may have been some hiccups but I fought my way back,” said Sutiya, who was heart-broken when she was unable to win a medal in the 2016 Olympics Games as the world No 1 then.

“I tried to turn the poor results of the past into a thrust for future success. It really paid of. I’m so delighted,” said Sutiya, who finally regained her momentum after poor results for months due to change of equipment and some techniques. She will enter an Olympic Qualifying event in South Korea in the next 10 days. In badminton, fourth-seeded Ratchanok blew a 11-4 lead away in the first game and lost to Saina Nehwal of India 21-18 21-16 in the women’s singles quarter-final. The former world No 1, after the big lead, failed to capitalise on her opportunities as the Indian world No 10 slowly found her momentum and got back into the match to score her fifth straight win over the Thai since the 2016 Australian Open.

“I was in solid control and felt relaxed until she started coming back. I came under pressure and couldn’t control the shots,” said Ratchanok.

“I came into the match knowing my chance was 50-50 per cent. I had to overcome my own nerves if I had to win that match. I still need to improve,” said Ratchanok, who has been stopped at this stage for two straight Asian Games.

Later in the day, Thai No 2 Nitchaon Jindapol lost to World Championships finalist PV Sindhu of India 21-11 16-21 21-14. Their exits meant no Thai woman has ever progressed to the semi-finals since Sujittra Ekmongkolpaisarn won the bronze medal in 1998 in Bangkok.

The Thai badminton’s team, however, achieved their goal of one Games medal by grabbing the bronze from the women’s team event last week. In golf, which was expected to yield two golds, the men’s and women’s teams finished fourth while teenage prodigy Atthaya Thitikul and Sadom Kaewkanjana finished fifth and sixth, the best among Thai players, in the women’s and men’s individual respectively. It was a lacklustre result for the amateur golf association after having won a gold, one silver and two bronzes in 2014. Thailand also won a bronze from the equestrian team event, scoring 126.70 points. Japan, with 82.40 points won the gold, followed by India, with 121.30. It was the second medal for the Thai equestrian team after winning the dressage team bronze last week. Later in the evening, the women's 3x3 basketball team edged out Taiwan 15-14 in the bronze medal match to capture the first Asian Games medal for Thailand in 52 years. Suttisak Singkhon won the first medal from athletics for Thailand in the 18th Games after he finished second in men's decathlon.