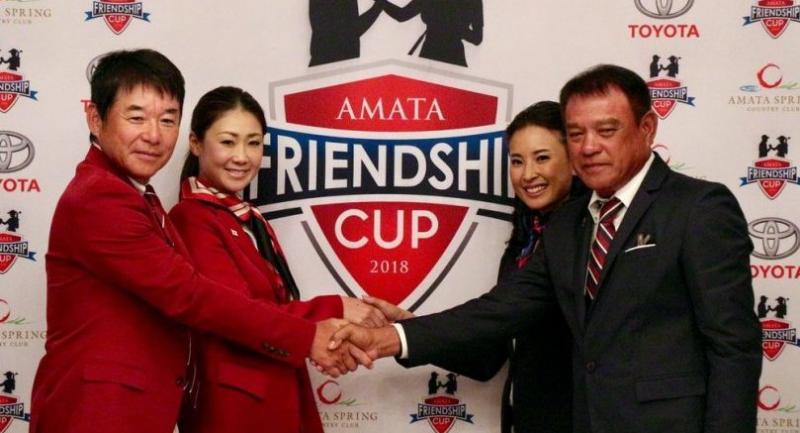 Thailand’s top golfers have all signed up to appear in a Christmas challenge against Japan which is being modelled on the huge success of the Europe-USA Ryder Cup.

The top two Thai men, Kiradech Aphibarnrat and Thongchai Jaidee, plus the top two women, Ariya and Moriya Jutanugarn, will headline the Kingdom’s challenge in the inaugural Amata Friendship Cup at the Amata Spring Country Club in Chon Buri from December 21 to 23.

The visitors have already confirmed their line-up will include Japanese No 2 and world No 43 Satoshi Kodaira, as well as 14-time Japan Tour winner Hideto Tanihara.

Each team will consist of 12 players – five professional men, five pro women and one male and female amateur. The format will follow that of the Ryder Cup and Solheim Cup; a 3-day competition comprising of team-based and individual sessions, with each team amassing a single points per match.

World No 33 Kiradech Aphibarnrat will spearhead the local team, backed up by former Thai No 1 Thongchai, the women’s world No 2 Ariya Jutanugarnand her sister Moriya, plus Pornanong Phatlum, the runner-up at the recent Ricoh Women’s British Open, and amateur sensation, 15-year-old Atthaya Thitikul.

Ozaki and Koya unveiled a powerful team including world number 40, Satoshi Kodaira, along with Japan’s top female and world number 15 Nasa Hataoka. They will be joined by the current number 1 and 3 players on the Japan Tour, Ryuko Tokimatsu and Kodai Ichihara, as well as PGA and European Tour regular Hideto Tanihara.

“This is one of the proudest days of my career and one I believe will have a great impact for golf, bringing together mixed teams in this exciting nation vs. nation team format,” said Boonchu.

Former Thai No 1 Virada said: “We have some of the most exciting players on all tours around the world right now and to bring them together as one team will be something every golf and sports fan in Thailand and Japan will love seeing.” Ozaki, who captained the Asian team to two wins over Euope in the 2009 and 2012 Royal Trophy (Europe v Asia), said: “We are ready for this exciting challenge and will be doing all we can to ensure we do our country proud and put up a strong performance.”

According to Arsa Sarasin, Chairman of the Tournament Committee and Chairman of the Board of Amata Spring Country Club, the tournament aims to organise a new dynamic event that will make an impact on golf in Thailand.

“Our ambition is threefold; celebrate and embrace the special relationship between Thailand and Japan; provide an exciting opportunity for young up-and-coming golfers to compete side by side with their heroes, and finally, to allow Asia’s best men and women to compete together for the same prize,” Arsa said.

The two teams’ full line-ups will be announced later.

Tags:
Thailand’s top golfers have all signed up to appear in a Christmas challenge against Japan which is being modelled on the huge success of the Europe-U